I've had the pleasure of climbing with two of my former NOLS instructors since graduating from the school in May. Adam Swisher and I realized a shared passion for one of the East Coast's best climbing areas: Seneca Rocks, West Virginia. I met him there shortly after my course and, with my new technical skills, I was psyched to lead up an iconic route that I've long had my eye on but previously lacked the confidence and ability to climb.

And then in Missoula, after hastily departing the smoky environs of Glacier, Josh and I planned a climbing trip up a feature that he had long wanted to climb, the Shoshone Spire in the Selway-Bitterroot Wilderness. Besides the great setting and impressive faces of rock, the two climbs shared one other important thing in common: NOLS instructors have a tendency of sandbagging the hell out of their former students!

sandbag (verb) - to understate the difficulty of a particular climb; to imply a climb is easier than it really is. Origins: adding a "sandbag" (or beer) to a partner's pack whilst hiking, thus making it harder than necessary.

To Josh's credit, information on the Shoshone Spire was sparse at best (which is in direct contrast to Adam's sandbag, when he had climbed the route many times before). We hiked in, camped at the base of the climb, and got an early start the following morning before the sun blasted the south face. We had the following description of the first pitch:

P1: start with a series of cracks starting near the west arete. There are many possible choices, but the left-most splitter is probably the easiest and great climbing. Continue until your rope runs out and belay from a tree.

Sounds pretty straightforward right? I thought so too. And looking at the route from below it didn't seem all that bad.

It. Was. Awful. But possibly in a good way. Definitely "Type 2" fun, the kind of experience that sucks pretty bad in the midst of things but that you can look back upon somewhat fondly, but only from the safety of a coffeeshop or with beers and buddies gathered around and far removed from the more miserable station in life that originated the story.

I consider myself a fairly solid 5.6 or maybe 5.7 lead climber, comfortable with exposure and runout at that grade. I'm guessing that after I rounded the corner of the straightforward stuff we could see from the ground that things started to trend toward 5.8 and maybe 5.9. My legs started to shake in the "sewing machine" familiar to climbers nervous or tired (I was both). I had to fumble with placing protective gear from awkward stances. My mouth went dry from fear and exertion. Twice my feet cut out without warning from tiny lichen crusted nubbins of granite and I was saved only by bleeding knuckles crammed into cracks for purchase on the rock. None of this is unfamiliar to more experienced climbers, but I was definitely in a fight with the hardest climb of my life. When I finally made it to the tree (it was the most glorious tree I ever saw!) I was frazzled mentally and physically, having operated at redline for 160 feet of hell. Josh, a much better climber than I, arrived at the belay station and announced "that was a hard pitch." No shit.

He took over the leading duties on the harder pitches (yes, things did get more difficult). If I thought my climbing was bold, Josh dealt with more exposure, more dirty lichen, and flaring cracks that didn't offer solid purchase for hands, feet, or protective gear. Heady climbing. I had to yank on quite a bit of the gear to haul myself upward, exhausted from my previous battle. But we made the top. The views were worthwhile and it was a great adventure with a good friend. I think that we grow the most from those situations in which we are challenged nearly to our limits and come out on top. I don't prefer to operate at that level of intensity every time I go out, but I feel it's needed just every so often to keep us humble and better able to handle stressors in the future, like a workout for both brain and body.

For all you NOLS instructors out there, I still consider myself a 5.6 leader.

After Josh and I parted ways in Idaho, I lingered to backpack and scramble around the Sawtooths. Following a terrific week in the mountains, I returned to Montana with a couple objectives in mind. First was to check out Bozeman's Museum of the Rockies, renowned for its dinosaur exhibits. Montana State University has Dr. John Horner on staff, a forerunner in the field of paleontology, a leading proponent of the "warm blooded and feathers" theory of dinosaurs, and the technical advisor on all of the Jurassic Park films. And yes, I do have a bit of a man-crush on Dr. Horner. Before I decided on the Coast Guard I toyed with the idea of becoming a paleontologist, but what kid isn't enthralled by dinosaurs?

I thoroughly enjoyed the dinosaur exhibits of the Museum of the Rockies. They also had a Living Farm which still operated like a homestead of the 1800s. Hard work for sure, but there's something about living so close to the land that is appealing even in this day and age.

My second objective for my time in Montana was a drive along the Beartooth Byway, one of the highest (it tops out at 11,000ft!) and most scenic drives in the country. While it does dip down into Wyoming for part of its length, the towns at the beginning and end are both in Montana.

I particularly enjoyed the town of Red Lodge. I whiled away most of the day in a coffee shop, reading a book from famous western author Normal Maclean about the Smokejumpers since my interest in forest fires was piqued ever since one shut down my Glacier trip. And thus ends my time in Montana, beginning and ending with fire and smoke. 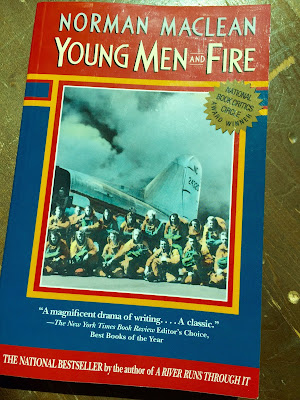