A little delayed, but it's been busy since I returned home. Working on grad school, a new job (more on that later), and enjoying fall in West Virginia. None of these "reviews" are sponsored. It's just things that I found to work really well for me this summer, proven over 15,000 miles on the road and 3 months living in truck and tent.

5.10 Guide Tennie - The best pair of shoes I've bought in a long while. These are "approach" style shoes, with definite climbing influence. Unbeatable for boulder hopping and scrambling. I felt comfortable enough on easy rock climbs with these to not warrant bringing a pair of dedicated climbing shoes, making for a more comfortable climb and eliminating the need to carry "walk-off" shoes in my pack. I saw some folks in Wyoming wearing these while backpacking, but they aren't as well padded as a dedicated pair of hiking shoes or boots. Light hiking no problem, but I didn't want to wear them with a 40lb pack over 10+ miles day after day. 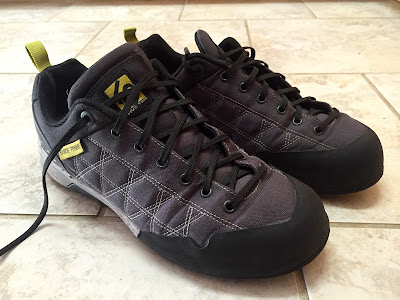 Astral Brewer - Another pair of shoes (I feel like Imelda Marcos). But it seems that nearly every outdoor activity calls for its own specialized footwear. These aren't your father's water shoes. You can, and I have, get away with wearing these for some post-river beer. I quickly ditched my dorky water shoes when I discovered these. Well thought out features, including amazing wet-rock-sticky-rubber and minimalist quick drying construction.

Icebreaker Hoody & Tshirts - Could be viewed as an endorsement for Icebreaker specifically, and perhaps so, but what I'm really promoting here is merino wool. It's expensive but worth every nickel in my opinion. You might not think of a wool tshirt as cool and comfortable, but think again. I practically lived in my merino hoody every day at NOLS and whenever the temperatures dropped this summer. Which brings me to one of the biggest benefits - little to no stink factor. I'm able to pack less clothing and go longer between washings, decreasing (but probably not eliminating) my "dirtbag-ness." 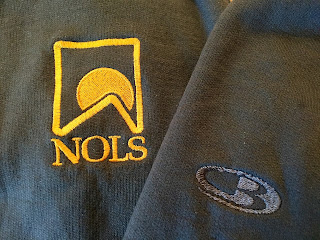 Battery Powered String LEDs - This is one of the cooler items on this list. Big Agnes just came out with a line of fancy tents with this integrated "Mountain Glo" feature. You could spend big bucks on a new tent or buy a three pack of these (http://www.lights.com/extra-bright-battery-string-lights-p-37199.html) for $16, and you could even split that cost with two of your friends (if you have that many friends). Let loose your inner MacGyver and figure out how to rig them up to create a nice homey atmosphere in your tent, eliminating the need to blind your tentmate with your headlamp while you play cards. I also used some velcro to attach them to the inside of my carpet lined truckbed canopy for a similar effect.

Princeton Tec Sync - My trusty headlamp of 5 years gave up the ghost this year at NOLS. I must have tried half a dozen before settling on this one. It's not necessarily the brightest model out there, but evaluate what you really need. Are you trying to summit Everest in the dead of night or are you really just putzing around camp trying to light your stove? It's lightweight, a good value, made in 'Murica, and has an intuitive and foolproof "dial" for output control. The red mode is surprisingly handy. I tried the more popular Black Diamond Spot and promptly returned it to REI. The darn thing kept turning on in my pack, despite the "lock" feature and requires you to memorize a specific "tapping sequence" to switch modes. Annoying. 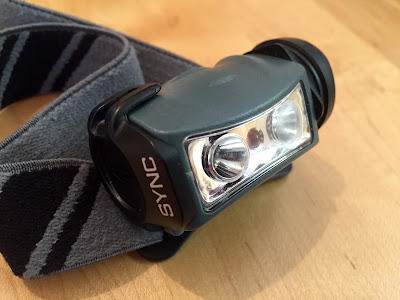 Suncloud Sunglasses - Sunclouds have been one of my go-to sunglasses for a couple years now. And I'm always wearing sunglasses. Very reasonably priced. Polarized. Style. Lifetime warranty. What more do you need?

Gaia GPS App - Last year I extolled my Garmin Oregon 600. It's pretty good. Still is. But I also discovered a $20 app for my iPhone that does nearly the same thing as my $400 GPS. And since I've got the iPhone with my anyway (love the panorama feature), it helps me lighten my load when appropriate. By appropriate, I mean that for extended backcountry trips, nothing will replace my enthusiasm for a dedicated, stand alone GPS unit with field-replaceable batteries. Or my preference to have a good map & compass. But on an overnight trip or a dayhike where I'm not as concerned with the battery life on my phone, I've come to really appreciate this app. Topo maps for the entire US and Canada are free, just remember to download them to the phone so you can access them without cell service in the boonies. 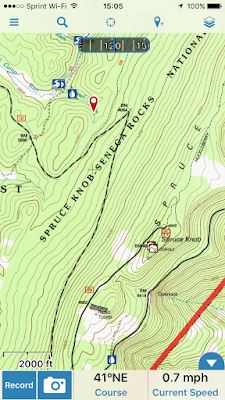 REI Flash 18 - I'm a sucker for backpacks. I have a bunch. But this is the one I reach for time and time again. I find it's best used as a daypack or summit sack on longer trips. It easily stuffs inside of your big pack and simplifies those forays from camp. I've had mine for years now and it's been up dozens of Western peaks and down a few slot canyons in the Southwest. Wait until it goes on sale and you could probably buy it with this year's REI dividend.

Rite in the Rain Journal - I started keeping a journal in 2014 knowing that I was embarking on a once-in-a-lifetime adventure and wanting to capture it in perpetuity. Rite in the Rain, a Tacoma, WA company, was what I used. I'm a firm believer in taking nothing outdoors that isn't weatherproof and my "adventure journal" has kept up with me, showing practically no wear and tear despite snow, rain, desert heat, and whitewater. My journal entries, appropriately edited for a greater audience, formed the foundation for most of my blog posts (apparently I have some non-PG-rated thoughts on mosquitos, paddling into headwinds, and the crowds of Yellowstone National Park). 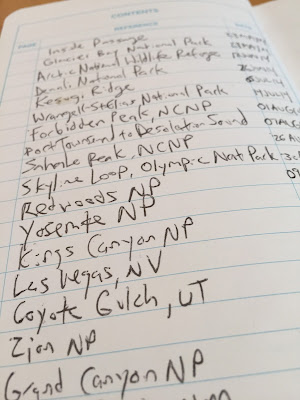 Kindle - This item is my lone exception to my "weatherproof" rule above. But safely ensconced in a ziplock bag, my trusty Kindle hasn't let me down. It's lighter than even a single paperback and can store hundreds of books which is quite important at the rate that I read. On solo expeditions my Kindle keeps me from going insane. For backcountry use, I'd recommend a model without a fancy backlight. The battery will last longer (mine goes for two weeks on a single charge) and with the DIY LED lighting I mentioned previously, you won't need a backlight to read comfortably in your tent.

Alpaca Raft - I can't say enough about my packraft. At only 5lbs and the size of a rolled up tent, it has opened up a whole new world of amphibious adventure opportunities that I'm just now beginning to explore. From accessing isolated campsites in Isle Royale to river trips in North Dakota and Wyoming, the packraft represents true freedom, flexibility, and spontaneity. I've got some great adventures in mind for the east coast, including some combination bike-and-float trips along West Virginia's extensive rail trail network, most of which parallel fun, moderate whitewater rivers.