I've very much enjoyed my time at home, but it's also been difficult to adjust to a more stationary life after nearly half a year of action packed traveling. So I decided to extend my Thanksgiving holiday and visit a number of friends and family on the East Coast using the train and rides from generous souls.

My first stop was Valley Forge National Historic Park with my Uncle Chris. We got to see Washington's headquarters, artillery fortifications, and replica huts the soldiers themselves constructed in which to spend the winter. If I thought my Northwest cabin was small, they crammed 12 guys into less than 200 square feet! There were great exhibits on camp life, winter hardships, and the training implemented by Baron Von Steuben. It's humbling to realize how tenuous the Revolutionary War was in the early years - utter defeat for Washington seemed to loom around the corner of every campaign. 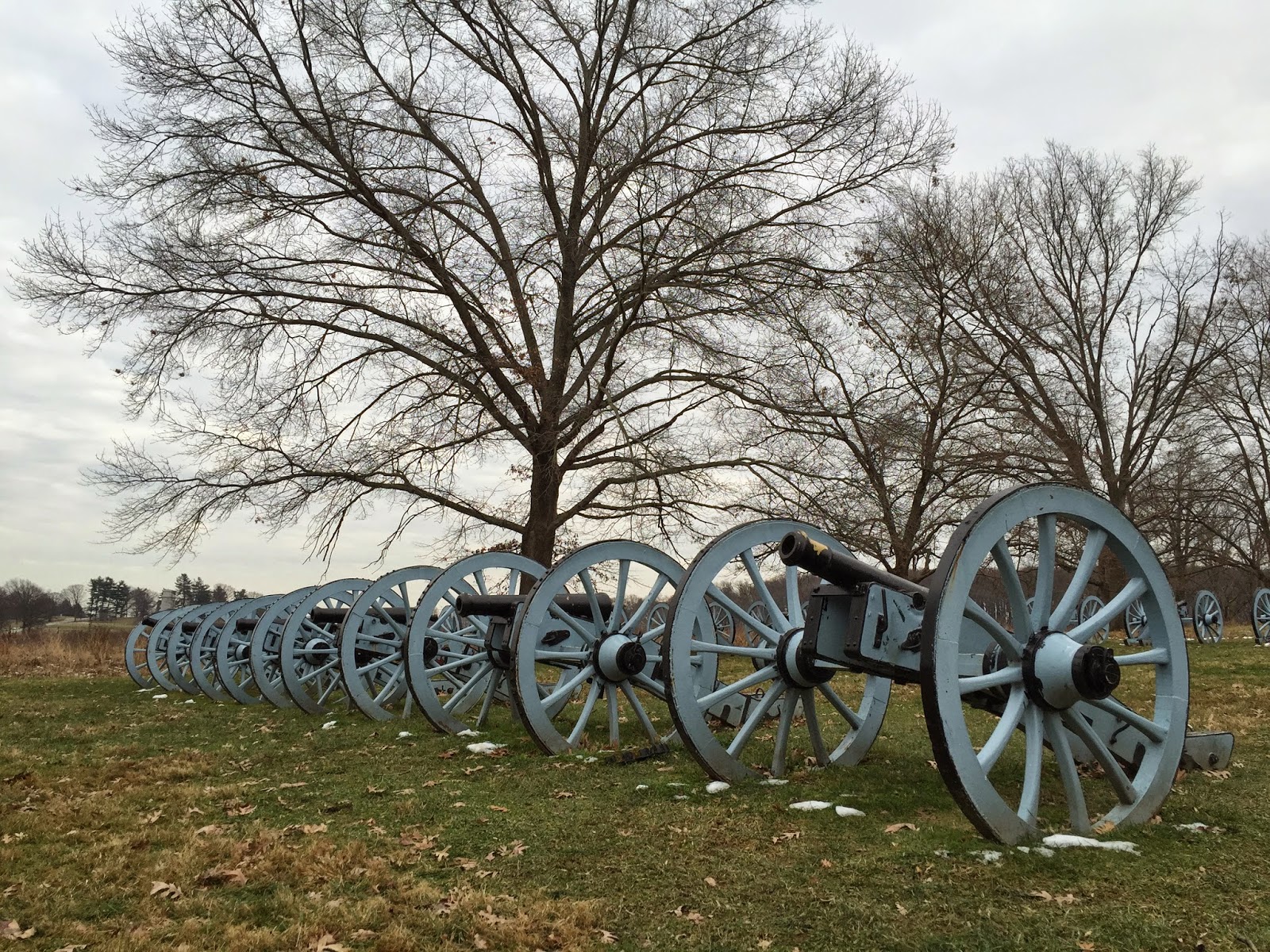 Back at Chris' house I engaged in the most epic Nerf battle of my life. Oh how Nerf technology has improved since I was a kid. Nerf guns these day can fire in full automatic and had 20 dart detachable magazines. My cousins and I blacked out the entire basement, raided all the furniture in the house for cushions to make forts, and shot it out with flashlights taped to our Nerf guns!

I continued my tour of early American history by visiting Independence National Historic Park in downtown Philadelphia. Some folks might not readily know that Philly, vice Washington DC, is the true birthplace of our country. It was awesome to stand in the same chamber that Jefferson, Washington*, and Franklin first declared independance and then drafted the US Constitution (more on that later). I can't remember a time before when I've felt such a connection to such a substantial historical event.

*Washington didn't actually sign the Declaration of Independence. He was too busy preparing an ambush for the British in New York. #welcometoMurica!

Aside from great history, Philadelphia is also known for cheesesteaks! Jonas Miller and I ate at each of the four top spots in just two days. My clogged arteries recommend, in order, Jim's, Pat's, Tony Luke's, and Geno's. All were good but the caramelized onions on a "whizwhit" put Jim's head and shoulders above the competition. We walked off the heart stopping goodness to the Philadelphia Museum of Art. They have a terrific medieval armor collection that illustrates a perfect blend of masterful and artistic craftsmanship with practical utility on the battlefield or tournament grounds. 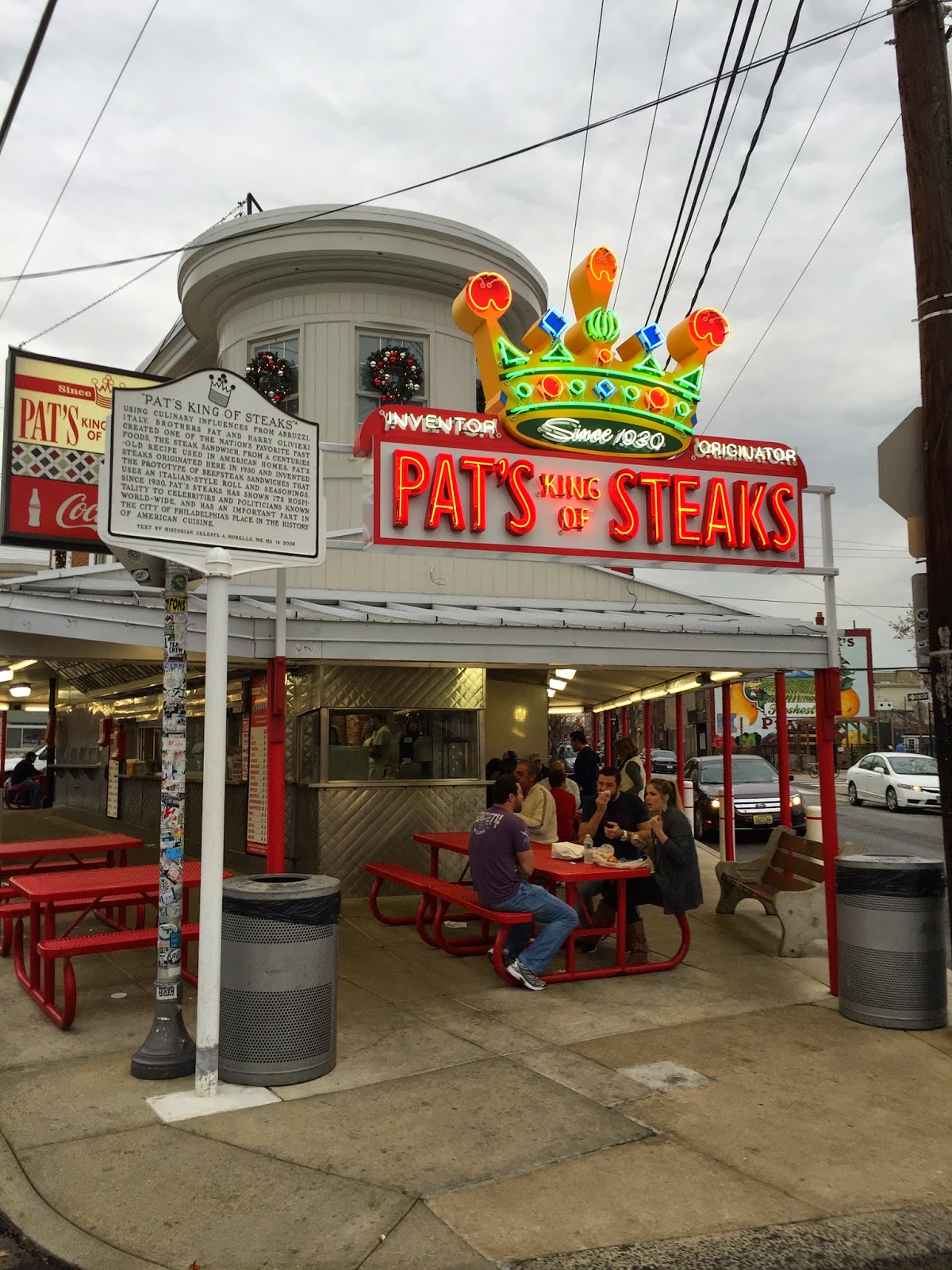 Jonas was also kind enough to take a side trip with me to Lewes, Delaware. Somehow I had previously neglected Delaware in my East Coast travels and had a glaring asterix in my quest for 50 states. After our tour of Cape Henlopen State Park and its cool towers used to sight German subs waiting for American shipping leaving Delaware Bay during WWII, I now only have 10 states left to go and definitive plans to see them all this coming summer. #50before30

I really enjoy riding trains. Yeah it takes longer and often costs more than you think it should, but it's a fun way to travel. You can get up and walk to the cafe car, you actually have legroom, and you can see another side of America. Plus it's hard to beat those old grandiose train stations like Philadelphia's 30th Street Station - a shrine to the days of yore with immense gilded ceilings, imposing columns, vintage waiting benches, and the ticking of the information board. SO much better than getting groped by TSA to wait in a sterile, personality-less airport while paying $5 for a straight up cup of coffee on the other side of security. And speaking of coffee, it's real nice to be back in the land of Dunkin Donuts.

A train south from Philly brought me to Baltimore, Maryland, home of Under Armour, the Orioles, and my sister. I had a good visit with her and her friends and a night on the town in Fells Point, a cool cobblestone historic area along the harbor, rife with seafood restaurants and pubs. I recommend trying a burger topped with bacon and crab dip, served with potato chips seasoned with Old Bay.

It's a short hop from Baltimore to DC. I enjoyed navigating the city via Metro and by the end of my four days in town I'd like to think that, excepting my enormous backpack, I didn't look like a bumbling tourist while trying to buy a fare card. I got to visit some old Coast Guard buddies fighting the good fight against the bureaucracy and ineptitude of headquarters! Keep up the battle gentlemen! Tim Ozimek and I got to do a little hiking at Great Falls National Park. The Billy Goat Trail was a fun scrambly treadway along the Potomac River that I'd recommend to anyone in the area; just be prepared for some crowds. Whilst at Great Falls we learned a lot about the C&O canal and I immediately started plotting a future pedaling and paddling adventure along the towpath.

While everyone was at work during the weekdays I headed to the National Mall to check out the various museums. At the Air and Space Museum I got to touch the second moon rock of my life (I'm pretty much an Apollo astronaut by now) and got to have a closer look inside a Mercury space capsule than the one I viewed in Texas. The American Indian Museum had a fantastic exhibit on Native American spirituality and religion. Each region definitely has unique beliefs but I noticed common themes of sun, seasons, moon, winds, harvest, migrations, and respect for ancestors and elders that indicated a far greater harmony with and understand of the natural world that I think would go a long way towards respecting the earth, our resources, and each other today. 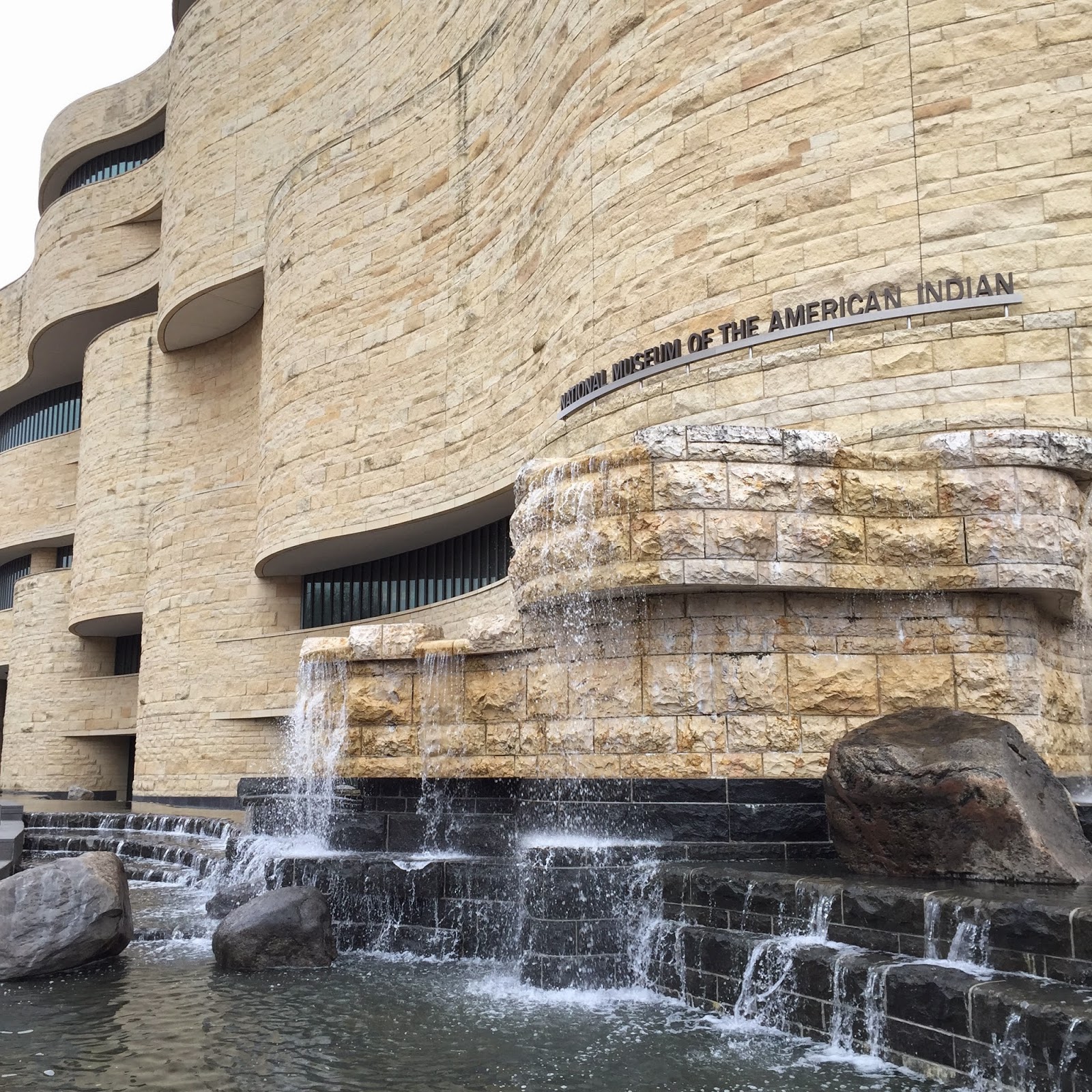 The Natural History Museum had a great mammalian exhibit that would make a taxidermist proud and PETA cringe. As an unexpected bonus, they had a temporary gallery for the 50th anniversary of the 1964 Wilderness Act that contained beautiful photographs of landscapes and wildlife across the country's best wilderness areas. I was happy to observe that I had the privilege to see many of them in person and was also served a large dose of inspiration for future endeavors in wild places. 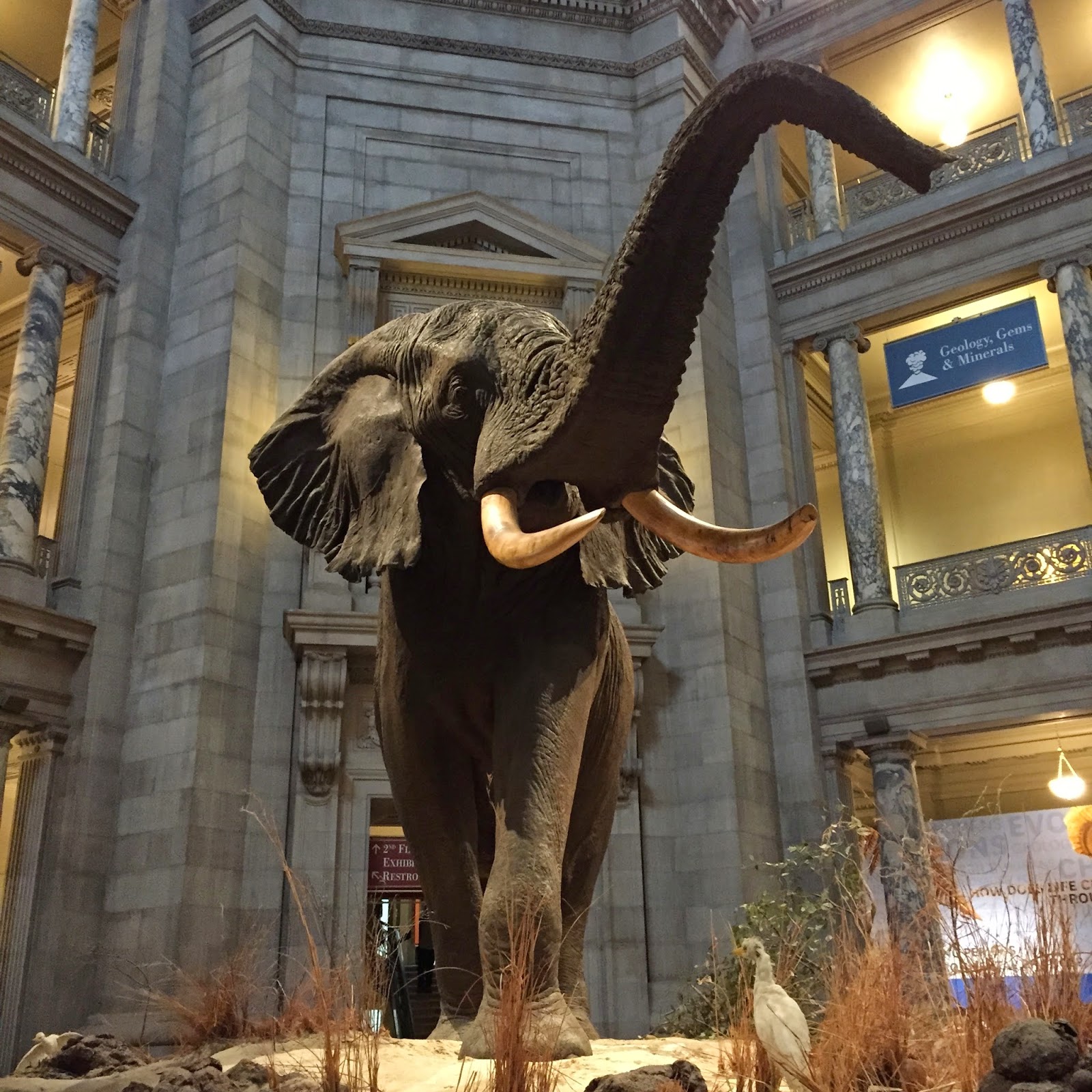 My favorite of the Smithsonian Museums (all free by the way!) was the Museum of American History. They had an impressive transportation exhibit; everything from 250 years of maritime history, the expansion of and by railroads, and the uniquely American relationship with the automobile. The Museum houses the original "Star Spangled Banner" - the flag that flew over Fort McHenry during the War of 1812 and the siege of Baltimore. I saw the table upon which General Lee surrendered to General Grant in Appomattox, Virginia to end the Civil War. And a particularly moving display of items left behind at the Vietnam Veterans Memorial Wall.

However, by far the best experience I had in Washington DC was my trip to the National Archives. There you can see the most hallowed documents in America, the holy writ of freedom! I stood in solemn awe before the Declaration of Independence, the original US Constitution, and the Bill of Rights. No photos were permitted, but I completely understand. The intervening 250 years haven't been kind to the parchments and it was sad to see that the ink has faded to the point of being barely legible. Now they are preserved in titanium armor cases, filled with inert argon gas so that nothing will chemically react with the paper or ink. Woe unto the unknowing tourist who pulls out a camera and takes a flash photo cheap shot at democracy; armed security guards were standing next to each display to prevent further UV destruction.

I spent an evening with more of my large extended family in Maryland, assembling a model train around the Christmas tree with my cousins, before embarking on the final leg of my own train journey from Washington to West Virginia. Done in the summer with a longer span of daylight, it's a scenic ride through the Virginia countryside and deep in the New River Gorge. In the winter it gets dark too soon to see much of anything. I was seated next to a pretty Australian girl on "summer" break from university. She had a jam packed itinerary of most major American cities and I felt like I had finally "arrived" as an accomplished domestic traveller, as I was able to recommend a number of things to see and do in all her stops except for LA. I really don't care to ever go to LA.

Thanks to all the friends and family that hosted me along the way and helped out with my logistics. Getting back out on the road was just what I needed! I'm looking forward to spending more time with family for the remainder of the holidays and wish all of my readers a very Merry Christmas.
Posted by Matt Kearns at 11:13 AM No comments: