I've had a few really cool experiences while road tripping where reality greatly exceeded expectations. Often it's been those few times that my Type-A, planning mentality hadn't gone into overdrive and I just showed up and went with the flow. A good life lesson perhaps. Anyways, North Dakota's Badlands joins Kings Canyon National Park, the Apostle Islands and Prince Edward Island as one of those experiences.

Heading west from Ely across Minnesota, the pines and lakes ever so gradually gave way to farms, plains, and prairie. Western Minnesota is indistinguishable from eastern North Dakota. I got to Fargo and stopped at the tourist information center for a free map. When I mentioned that my ultimate North Dakota destination was Theodore Roosevelt National Park (TRNP), the helpful clerk gave me a brochure for the Medora Musical and said it was a "must see." The show kicks off every summer night at 7:30. With 300 miles to drive it was going to be a close call. I purchased a ticket over the phone, gambling on a 75mph speed limit and a free hour courtesy of the Central-to-Mountain time difference. I made it with half an hour to spare.

Teddy Roosevelt came to Medora to try his hand at ranching. His cattle ventures ultimately failed but he returned east with an appreciation for wide open spaces and abundant wildlife. He left a legacy as a staunch conservationist, befriending John Muir, establishing the first National Parks and using his executive authority to create National Monuments in order to protect important sites threatened by development (the Grand Canyon is one). This legacy continues today - President Obama has the chance to designate West Virginia's first National Monument and permanently protect 120,000 acres of federal land in Appalachia from mining and fracking. Please visit birthplaceofrivers.org for more information.

Medora celebrates its connection with Teddy Roosevelt through a country-western musical show full of Rough Riders, classic Wild West, and a hearty dose of patriotism. Broadway in cowboy hats and with real horses on stage. The show is in its 50th year of production and was just a fantastic, wholesome, American experience. 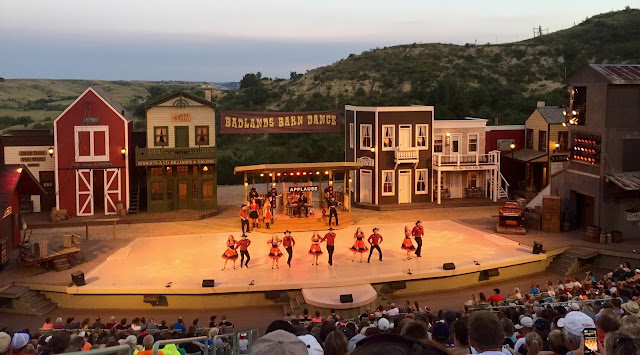 I awoke with sunrise the following morning to make a drive thru Theodore Roosevelt National Park's South Unit before the crowds took over later in the day. As an expected bonus, the animals were also very active.

With more accomplished before 9am than some folks do in a day, I enjoyed a leisurely breakfast in town before making the 70 mile drive to the separate North Unit of TRNP. When I got my map from the ranger at the entrance station, one glance immediately screamed "PACKRAFT." Once more I got to enjoy the flexibility of having a packraft handy, abandoning hiking plans for a fun trip that I'm sure isn't experienced by many visitors.

I hitchhiked (try that with a kayak!) from the campground out 9 miles to the end of the North Unit's scenic drive (thanks Jim!). From there it was less than a mile down the crumbly badland canyon into the Little Missouri River basin, where I had a 6 mile straight-shot float back into the campground.

The water was pretty shallow in spots; if I drifted out of the channel of deep water my butt would scrape the sandy bottom and I'd have to hop out and walk the raft back into the main flow. But the current moved along at a nice 2mph, so I didn't have to do much paddling as I enjoyed the scenery from a unique vantage point on a beautiful sunny afternoon. Floating the Little Missouri River on a whim thru Theodore Roosevelt National Park quickly jumped into the "Top Five Ways I've Ever Spent Three Hours" and made me even more excited for future pack rafting possibilities.

On to Calgary to pick up intrepid adventurer Trevor Clark for some Canadian Rocky Mountaineering.