Mom and I headed east from San Francisco. We made a slight detour north of Yosemite on a tip from a friend (thanks Art!). He said that one of the country's best preserved ghost towns is in Bodie, California. I think he's right; I expected a dumpy little place and was amazed at the number, diversity, and quality of the structures still standing. It was like something straight out of a zombie apocalypse. The late afternoon light created great hues on the buildings and the surrounding desert. 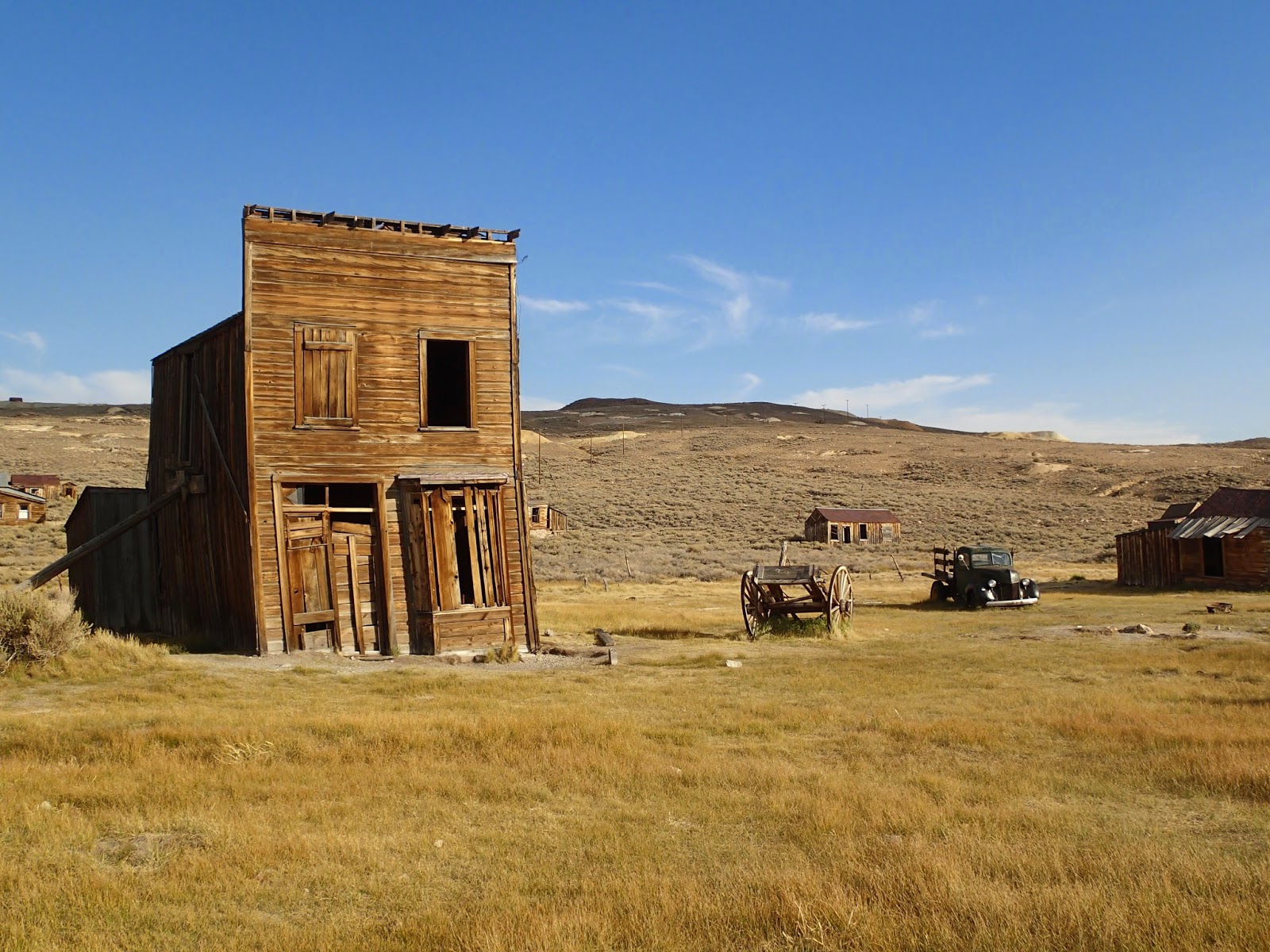 We made it into Yosemite late but we didn't have to set up camp in the dark - we decided to stay in a tent cabin. They were pretty nice, equipped with real beds, wool blankets, a small table, and a very effective wood stove. The only downside is that they were paranoid about bears and mice so you weren't allowed to cook anywhere in the tent cabin village. Had to drive to a picnic area 2 miles away; inconvenient but manageable.

The following day in Yosemite I climbed Cathedral Peak. At 10,911ft, it was first climbed by John Muir in 1869. It was great to follow in his footsteps, but not literally, because I misread my trail directions and had to do a little bushwhacking to get back on track. It was far easier to travel off trail here than in the Cascades, there was a minimum of underbrush and lots of open granite slabs. Whilst off trail I kept hearing weird sounds, like a jet engine. Then I saw smoke and quickly realized that I had stumbled upon the fringe of the last bit of forest fire that had ripped thru a large part of the central part of the National Park a few days earlier. I've never seen a forest fire before. It was very unnerving and I backed away and figured out what to do. NPS was aware of the small zones still burning, said they posed little immediate hazard, hadn't closed Cathedral Peak like they closed other areas, I wasn't near where I was supposed to be, and the winds were blowing the fire away from where I needed to go. Right or wrong, I decided to continue.

Cathedral Peak was a delightful climb on prime Yosemite granite. Because it had been first climbed and rated so long ago (modern climbing ratings originated in Yosemite), I found the route slightly above its Class 4 rating.  But it was in that perfect zone that offers a solid challenge yet was within the upper limits of my scrambling ability and comfort level. The summit was very exposed, and with a stout wind I decided it would be best to stay on top only long enough to get my photos. The views of the High Sierra were amazing and I wish I would have felt like lingering. 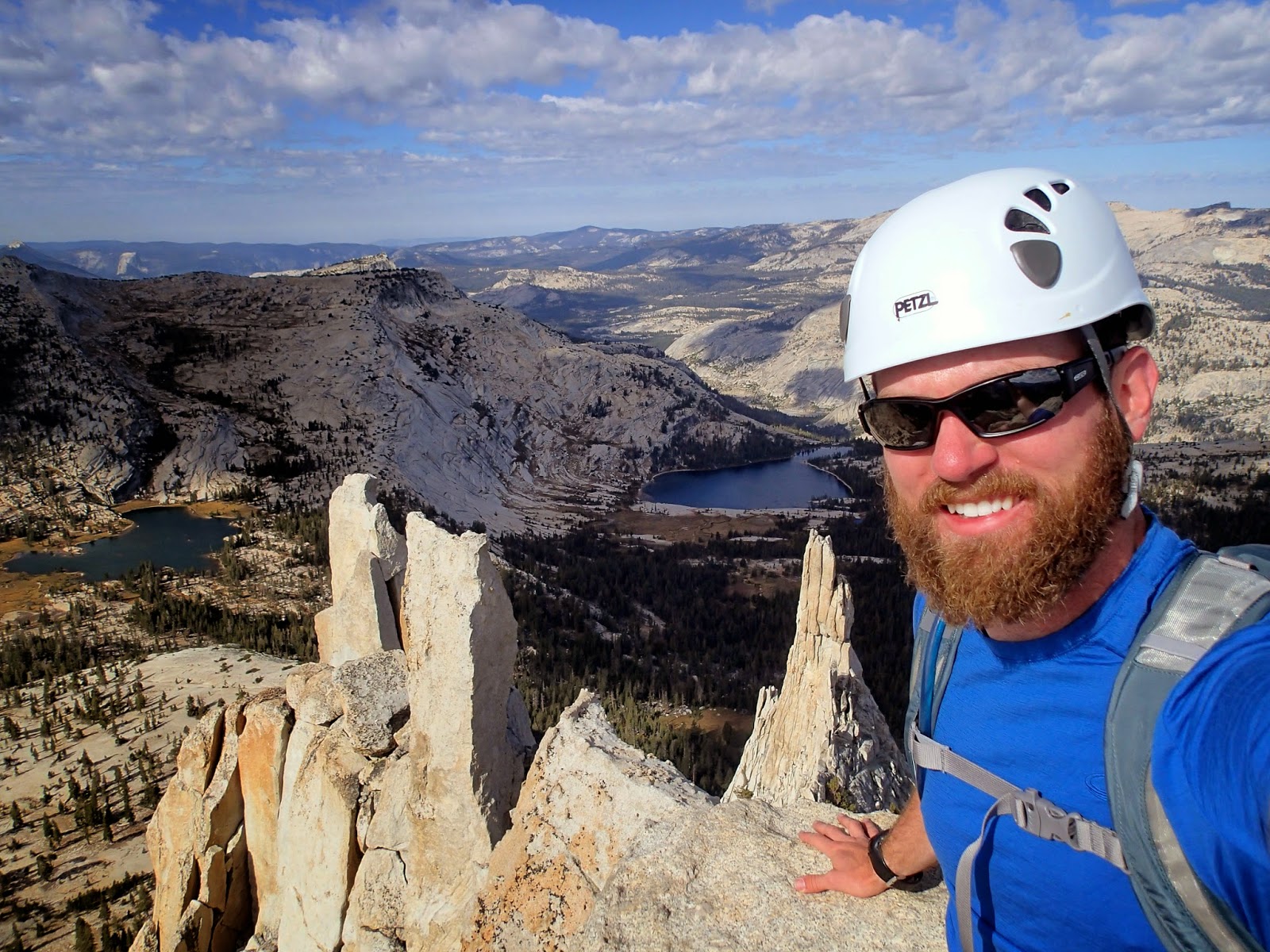 I returned from the climb, never again seeing any indications of fire danger, in plenty of time to spend the afternoon with Ma. We took a nice hike thru the Tuolumne Meadows. 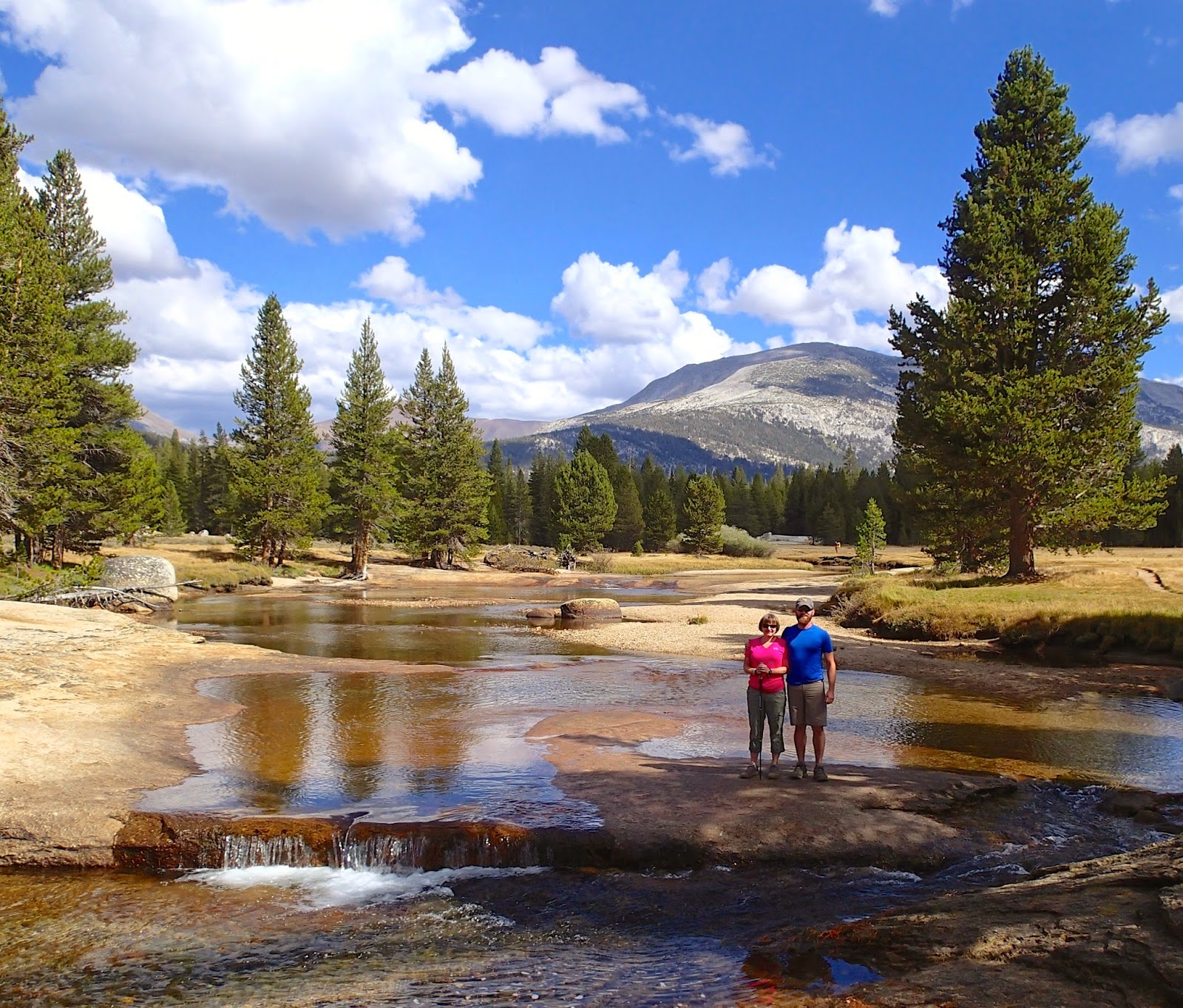 Our final day in Yosemite was spent in the infamous Valley. We knew it was a popular spot but figured that with it being so late in the season and a weekday we would have the place to ourselves. WRONG. The Valley was a total zoo. We saw all the requisite sights, then headed out and away on the drive up to Glacier Point for epic views of Half Dome. 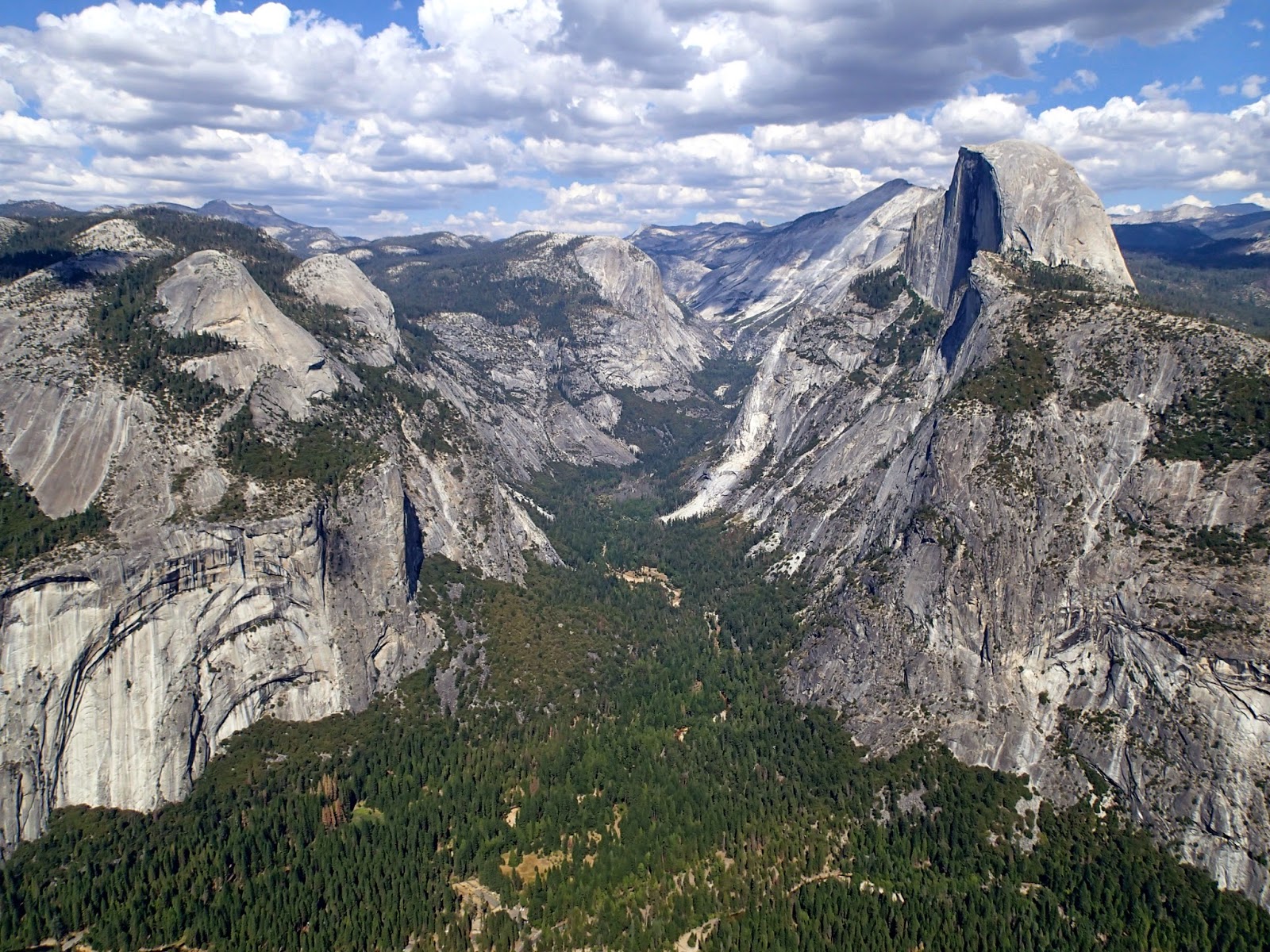 After Yosemite we drove to Kings Canyon National Park. Talk about a great contrast, Kings Canyon was practically empty. Call me selfish but I don't like big crowds when I go outside. Camping and hiking along the upper reaches of the Kings River was the highlight of the whole trip with Mom. Zumwalt Meadows were beautiful in the morning light, with a golden tinge on the grasses, forests, Kings River, and the granite walls hemming it all in.

Due south of Kings Canyon is Sequoia National Park, protecting the largest trees on the planet. Truly awe inspiring, you cannot get a feel for the enormity of a sequoia tree unless there is a known reference object, like a person standing near them. Pictures hardly do them justice and it is humbling to be in the presence of a 2,000 year old giant. They've seen and endured so much in order to attain their age and size. Luckily enough folks had the foresight to protect the trees before they could all be logged; Sequoia was the nation's second national park.

From Sequoia it was on to Death Valley. Mom and I had traversed so many ecosystems during our trip, from the lush Northwest to foggy Pacific coastline, from the granite of the High Sierra to the salt flats of the desert. I had never been in the "real" desert before and it was quite an experience for me. The heat was scorching and the scenery stark and bleak, but still with a beauty of it's own, especially under the clear night sky. I enjoyed learning about the desert ecosystem in the NPS Visitor Centers. We didn't do any hiking (it reached 100* before noon) but got to see many of the famous Death Valley sights by air conditioned car.

We swung by the Hoover Dam via the Pat Tillman Memorial Bridge on our way to Vegas. The "bathtub ring" on Lake Mead was a disturbing reminder of the water use issues facing the American Southwest. Hopefully they get it all figured out soon, but eliminating all the green lawns, pools, and decorative fountains I kept seeing might be a good place to start. 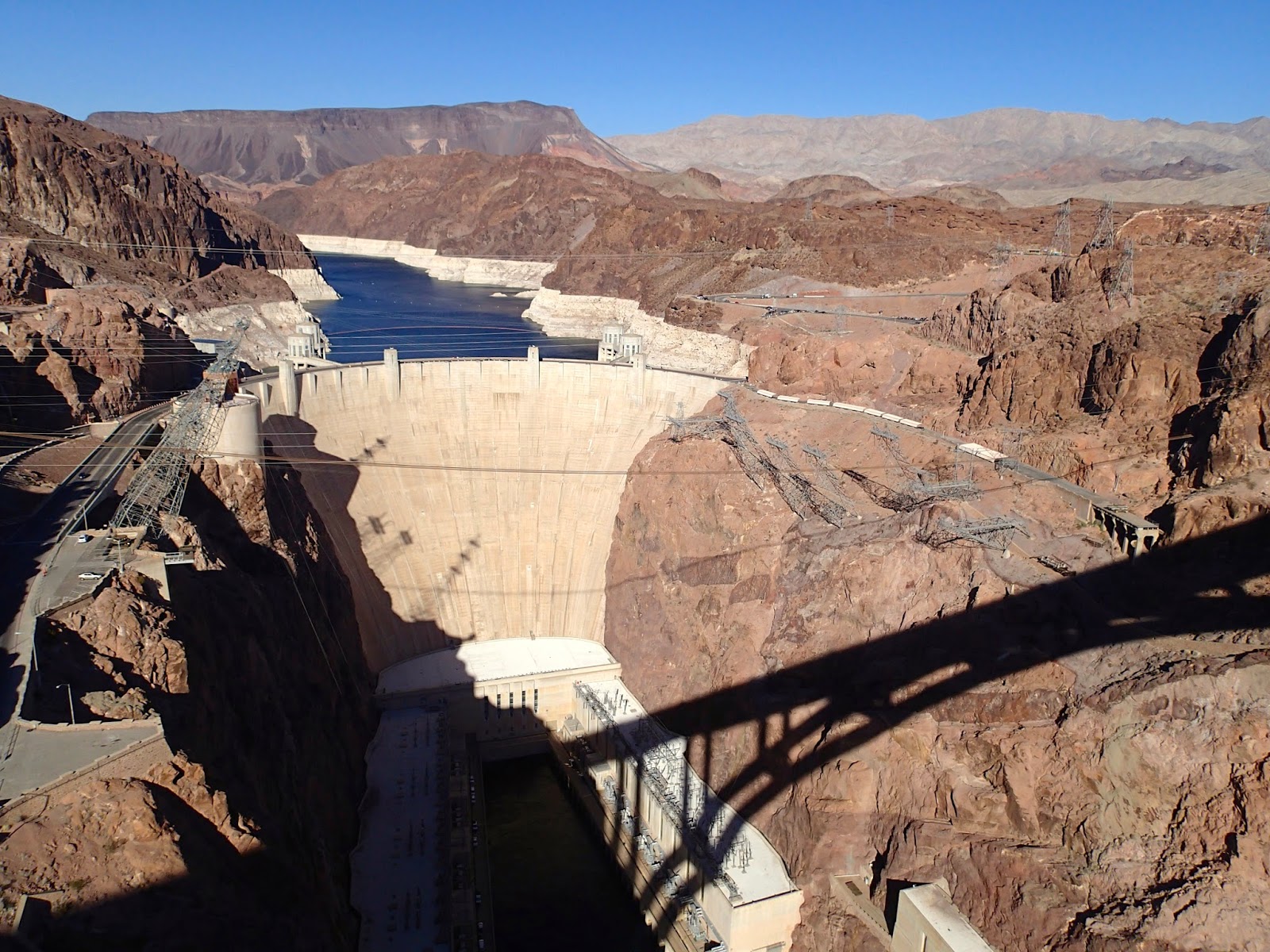 After so much time in the parks and wilderness, the drive into Las Vegas was a culture shock. I've never seen so many lights and so much blatant consumerism and excess. Not a place I'd choose to frequent but I'm happy to have seen the sights. Like New York City, Vegas seems a mandatory trip for all true 'Muricans at some point in their life. To show that this mountain man can hang with the high rollers, I employed the "$20 trick" at the front desk. What's the $20 trick you ask? Well, just slip the clerk a $20 with your credit card and ID when you check in and ask for any complimentary upgrades. We went from a regular economy room to a room with a Strip View. Like a boss!

Paris was a nice resort located right in the middle of the Strip. Chel made the trip out to Vegas for the weekend, bringing the quorum of Kearns up to 3/4. Got to see Cirque du Soleil and Blue Man Group shows. Toured all the themed casinos; favorite was likely New York and the nicest was the Bellagio. Ate at some great restaurants and won $44 throwing craps! But I'm ready to get back on the road. I've got some more desert camping to do and some canyons large and small to explore.