Picked Ma up in Portland. Our first stop was Multnomah Falls in the Columbia River Gorge. 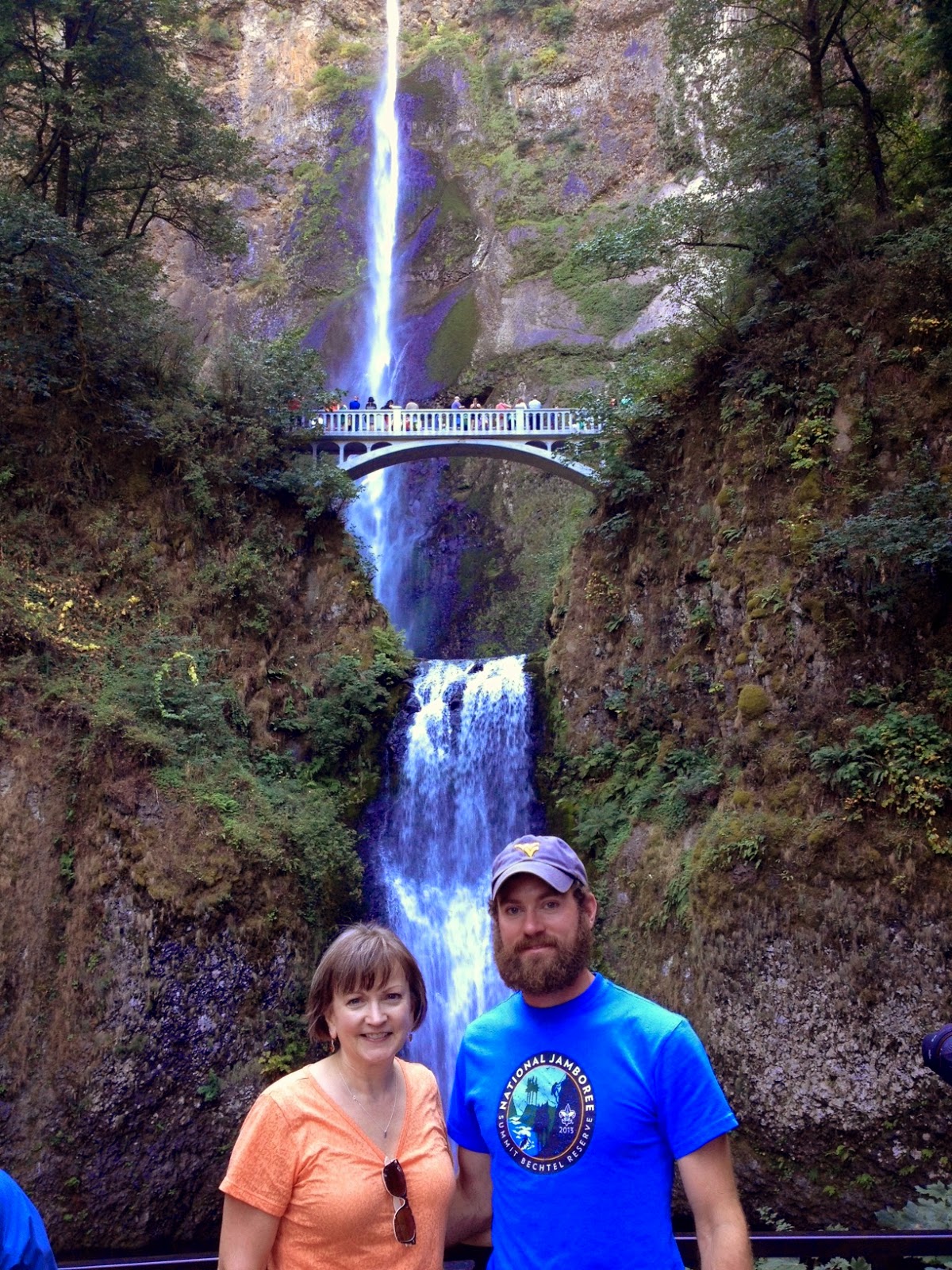 We had a good time in town. I think that in a strictly "urban" sense, I enjoy Portland a little more than Seattle. It has a great weekend market downtown, Powell's Books (3 stories and an entire city block), Stumptown coffee, and of course, Voodoo Donut!

We left Portland and made our way to Crater Lake National Park via Mt. Hood and Bend. Mt. Hood's glaciers and snowfields were quite reduced at this point in the year, but the Timberline Lodge was a fantastic example of an historic ski lodge. I can only imagine what the centerpiece hexagonal fireplace would look like in winter. In Bend, I got to stop at the HQ of my favorite Northwestern brewery - Deschutes. Their brewpub smelled of delicious hops and yeast.

Sadly Crater Lake suffered from a number of forest fires in the park and surrounding area. You could still get a sense of the immensity of the caldera, but the views and photos were abysmal and the air was uncomfortable to breathe. Mom did enjoy her first night ever of camping in the forest lower on the mountain and below the effects of the smoke. I enjoyed chopping the night's firewood with a beautifully refinished vintage double bit axe, a gift courtesy of Phil. Thanks bud!

From Crater Lake we continued south to the Redwoods of California. The worlds tallest trees were so impressive! It really hurt your neck to walk around looking up for so long. The winding footpaths and roadways passed thru a primeval mix of lush green ferns on the forest floor and towering red trunks. The best redwood groves were found in Humbolt Redwoods State Park and along the Avenue of Giants. 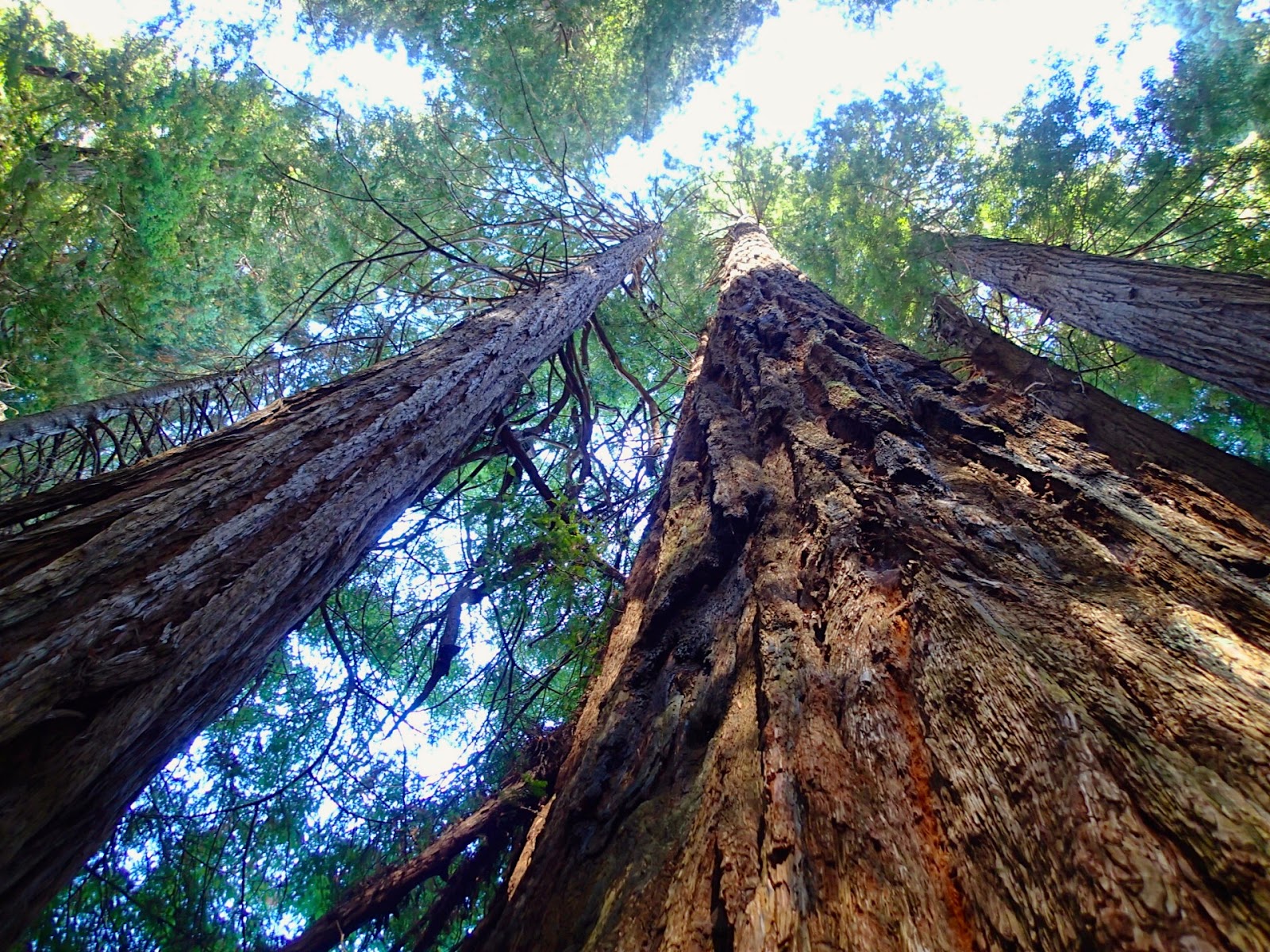 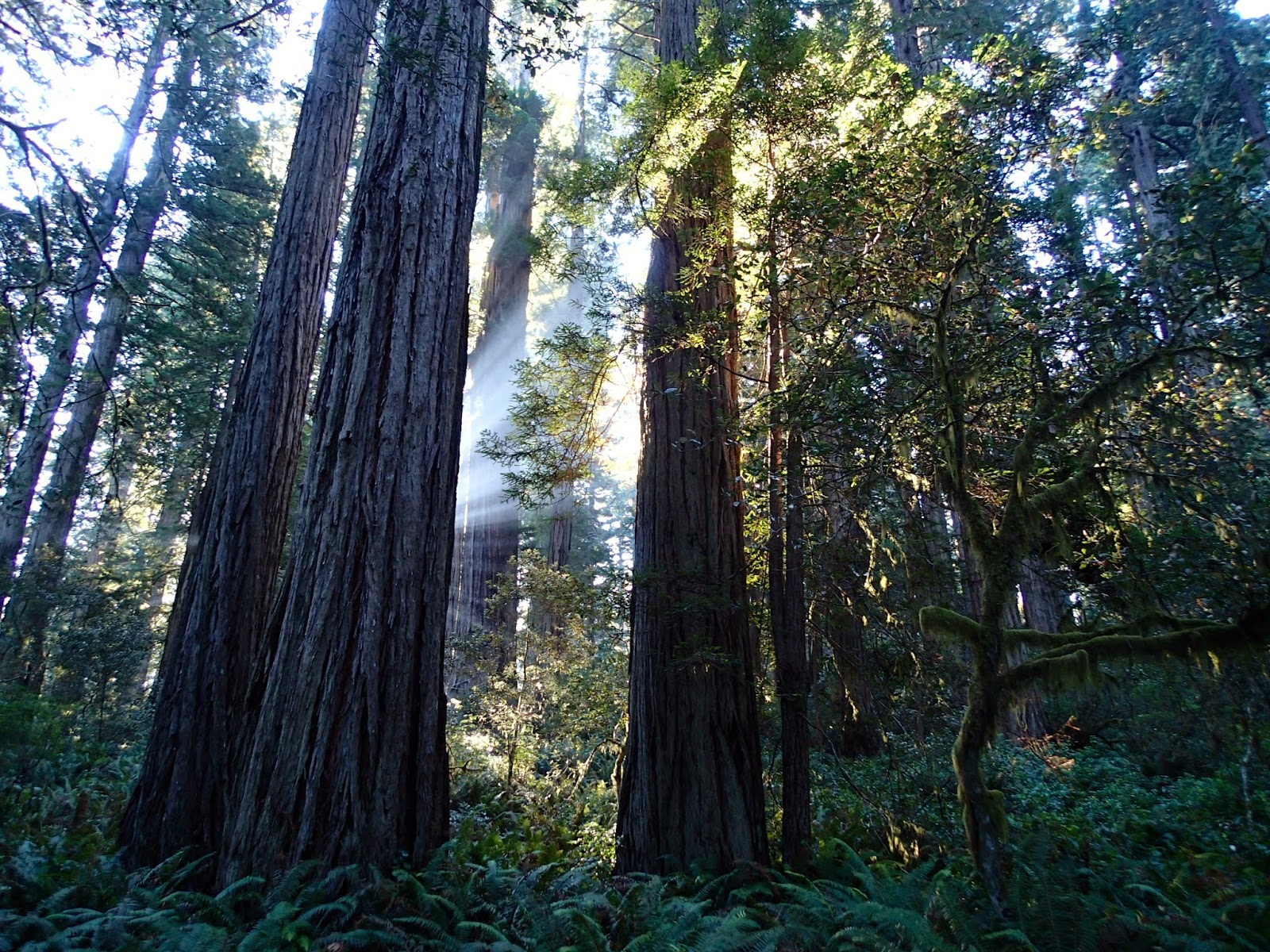 We tried to see as much of the Pacific Coast as we could during the drive to San Francisco. That meant a long-but-totally-worth-it detour to the "Lost Coast." The Lost Coast is undeveloped and consequently had the best beachfront driving of the trip. Golden hills in pretty contrast with the blue ocean. Back on the Pacific Coast Highway, thick fog rolled in and obscured most of the views and made for difficult driving conditions on a road that was plenty harrowing enough with hairpin curves without guardrails to protect the 200ft drop to the rocks and waves below. 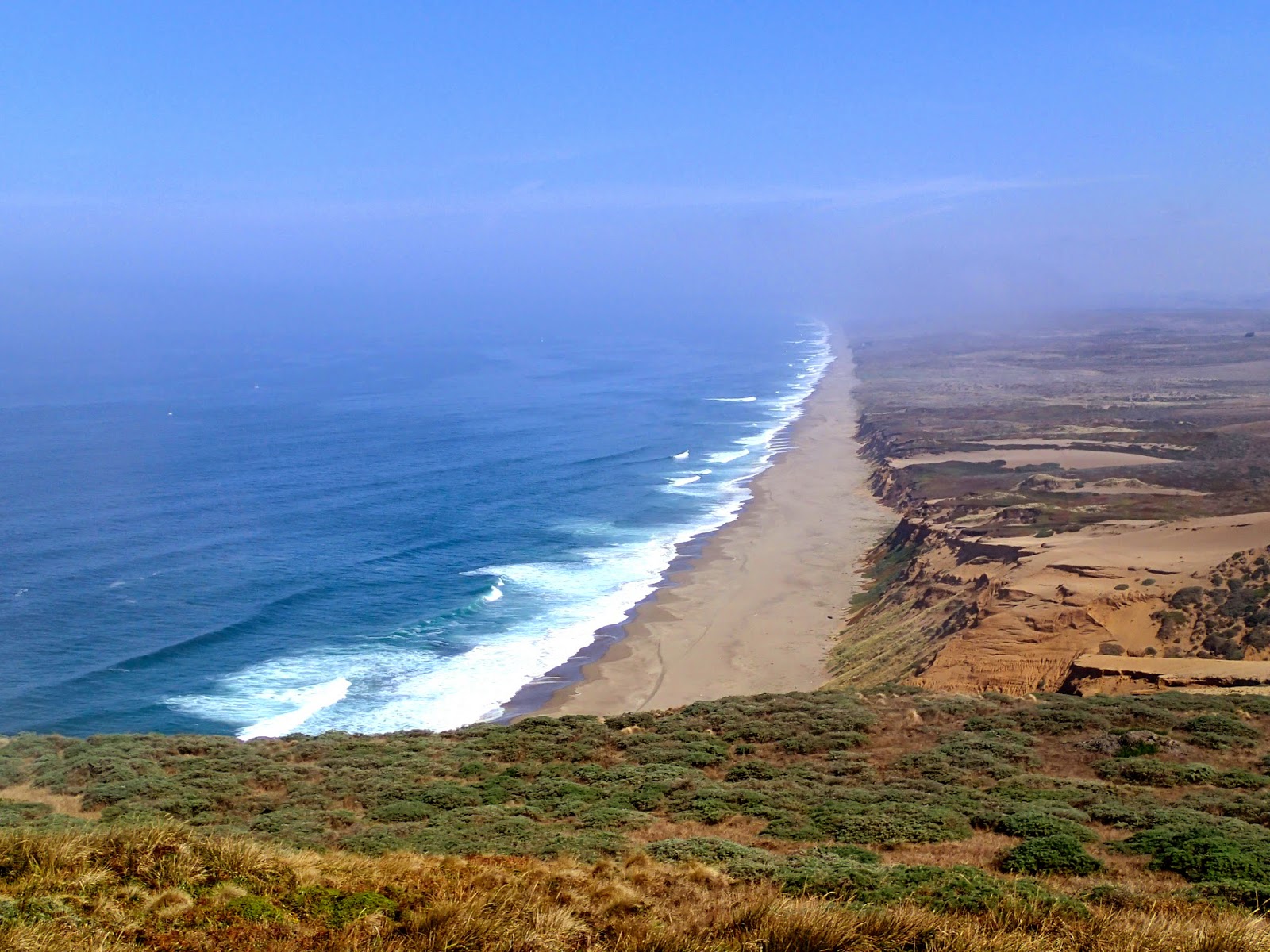 I've been to San Francisco a number of times with the Coast Guard and had the lay of the land down pat. I shanghai-ed Mom onto the Matt Kearns' San Francisco Whirlwind Tour. This could easily be modified into a weekend itinerary, to include travel, and you'll see just about everything cool in town. 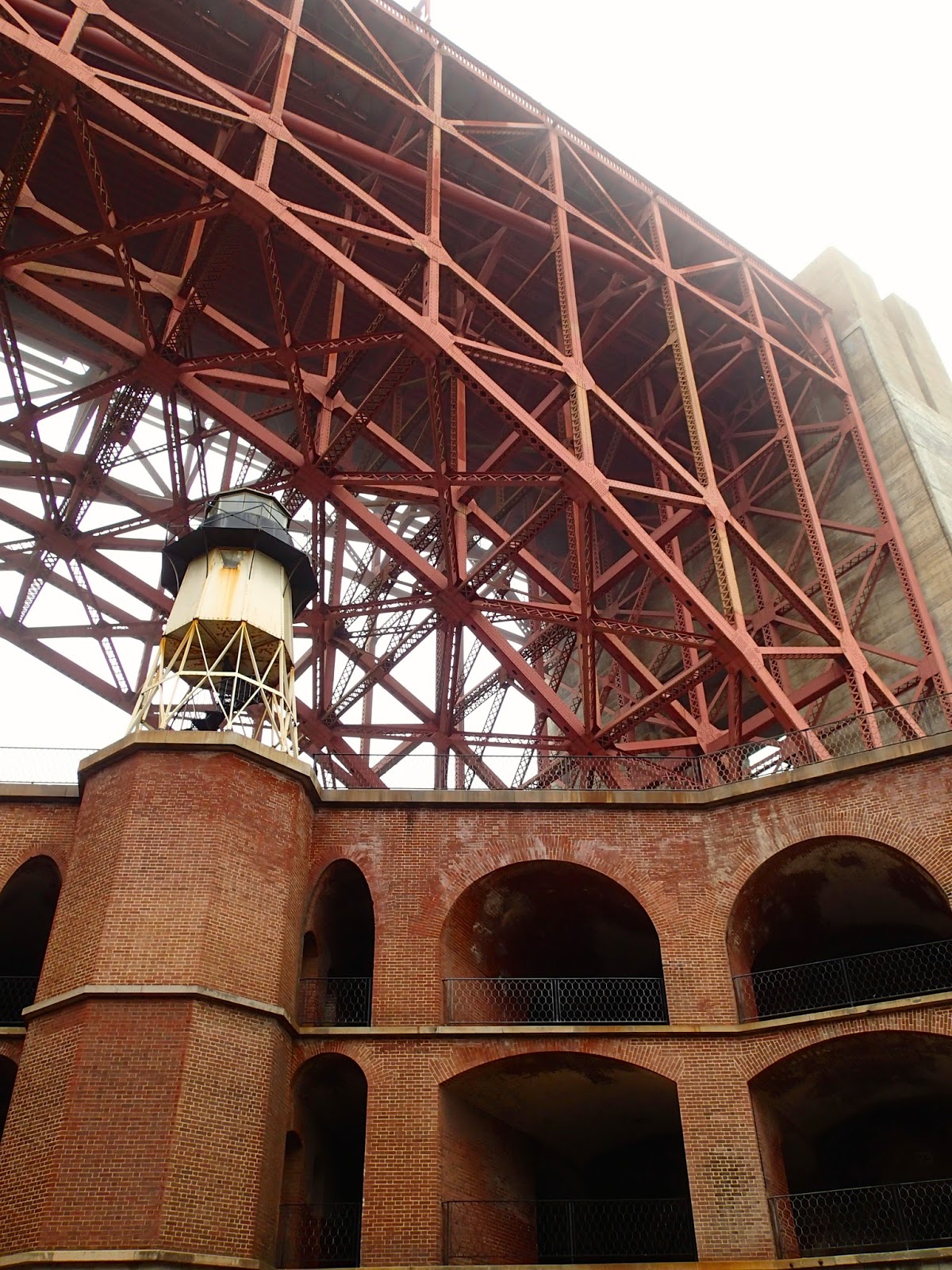 1600 Check into the Columbus Motor Inn. Reasonable rates, free parking, clean, GREAT location.
1800 Meet any local friends for dinner and drinks at 21st Amendment Brewery (thanks Olsons!). Pray for no Giants game because this place will be packed if so.
2000 Walk back along the Embarcadero to your hotel. Enjoy the sights, including the Ferry Building. Pick a spot along Fisherman's Wharf for dinner tomorrow. Hope the "Bushman" doesn't scare the shit out of you. Pick up a loaf of sourdough bread & some jam from Boudin for your breakfast tomorrow.

0830 Wake up. Put a good dip in. Crack a cold one. Get dressed. Eat sourdough bread.
0930 Leave Columbus Motor Inn. Head toward the bottom of famous Lombard Street. You can't see all the curves from the top. Try not to get run over by cars while you take your photos.
0945 Walk down to the Hyde Street cable car turntable. Get a $15 all-day pass.
1000 Walk back up to Ghirardelli Square. Use your cable car ticket to get 10% off their tasty chocolates.
1030 Walk down to the free Maritime Historic Park. Good info on San Francisco's history as a trading port, the old car ferries, and wooden shipbuilding.
1115 Walk back to the cable car turntable. (It sounds like a lot of back and forth, but it's all really close). Take the cable car uphill to the Cable Car Museum on Washington Street. Bonus points if you hang onto the side of the cable car and high five people in other cable cars when you pass by.
1200 Hop on another cable car going the same way you were before and ride it to Union Square. Do some shopping if that's your thing. Mom reports that the William Sonoma flagship store is in Union Square. Sure, whatever, at least they had free samples of food to keep me busy while she shopped.
1300 (or earlier if you don't like shopping as much as Mom) Walk from Union Square to Chinatown. Make sure you go thru the gate on Grant Ave. Enjoy the crowded hustle and bustle. Find a place for lunch. We liked Oriental Pearl.
1400 Catch a California Line cable car west to the Powell and Mason line. Make sure you catch a Mason cable car. It will take you Columbus Ave, within a couple blocks of your hotel. Rest up back at the hotel.
1700 Go to an early dinner on Fisherman's Wharf. Make sure you are out by 1800 or so and then walk down to Pier 33.
1830 Catch the ferry to Alcatraz Island. You'll need reservations well in advance, probably a month or more. The night tour on Alcatraz is pretty popular. But it's way better than the daytime tour. The crowds have thinned out and nighttime does something to the prison to make things a little eerie. Alcatraz has a ton of rich history and should not be missed. Savor the awesome views of a lit-up San Francisco on your ride back.

2100 Finish your time in San Francisco at a bar of your choice. North Beach has a good nightlife. But I like making the trip back toward the Financial District and sidling up to the bar in the Old Ship Saloon. Try an Anchor Steam (available throughout the city). You won't be disappointed, it's a favorite of mine.

Congrats! You've seen San Francisco in less than 36 hours! Time to get out of the city and back into the wilderness!
Posted by Matt Kearns at 5:41 PM