The second half of my time in Wyoming eclipsed that of my first. Epic adventuring, good weather, and beautiful scenery forever secured a place for The Equality State in my top favorites.

From Jackson, Grand Teton National Park is just a short drive to the north. I didn't have a climbing partner for this phase of the trip, so I settled on a fun scramble up Teewinot Mountain in lieu of a climb of the Grand itself. It was way less crowded to boot! I set off at 0330, intending to beat any potential afternoon storms. I tried to pace myself for the 5,600ft climb, but the last month living at higher altitude and all of my climbing thus far had left me in better shape than I expected. I hiked much faster than I planned on and had to don all of my extra layers and huddle in the lee of a boulder for 45 minutes waiting for first light so I could better find my way through the tricky part instead of relying on my headlamp alone. Good views of the Grand Teton from the airy and exposed summit.

I waited out a one day storm reading a book in the massive lobby of the Jackson Lake Lodge, enjoying a cup of coffee, sandwiched between a roaring fireplace and enormous picture windows that (in clear weather) have great views of the mountains.

The storm cleared that night and I got up super early the following morning to capture some sunrise shots that I had scouted a few days prior, just waiting for the right conditions. Hard to beat a crisp, clear morning with a cup of coffee in hand, watching the alpenglow move from the tips of the summits down the mountains into the valley. 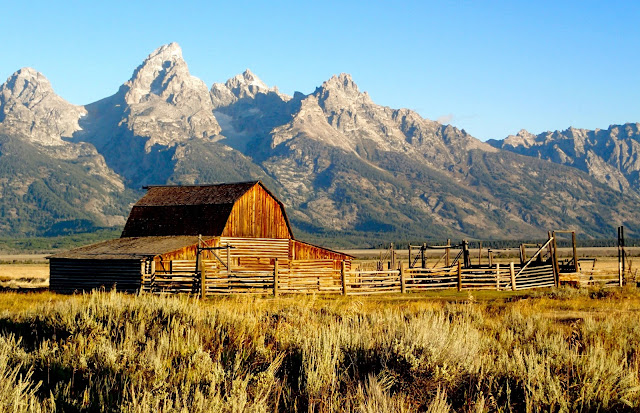 After my photo extravaganza, I packed up my paddling gear and hitchhiked north along the highway to the Pacific Creek tributary of the mighty Snake River. A few minutes later I was floating back to my truck in my packraft, enjoying a Class II paddle with great views beneath the Teton Range. As the afternoon progressed I had to buck an ever increasing headwind, turning my leisurely trip into a solid workout. My little raft turned the heads of guides and fisherman and was quite the conversation piece at the takeout. 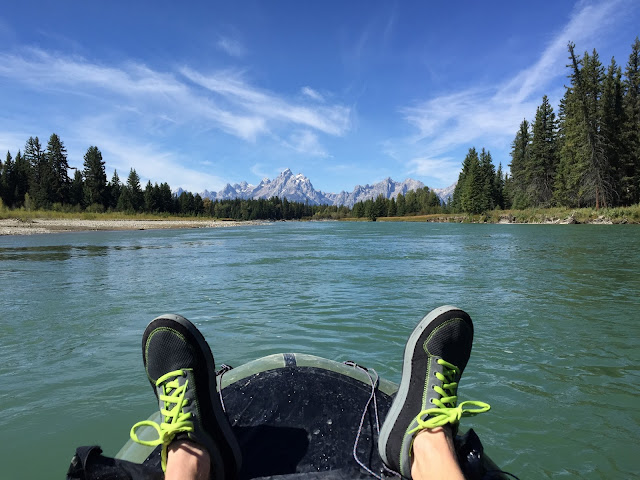 Teton adventuring complete, I picked up Coast Guard buddy Tim Ozimek from Jackson. I had done some of my very first mountain climbing with Tim and his dad when we were stationed together in Washington. Tim has since transferred to DC and I was able to stay out in the Northwest, gaining enough experience to start leading the climbing trips myself. We planned a weeklong trip in the southern part of the Wind River Range, climbing in some of the most picturesque places in the country but hoping to avoid the notorious crowds with our post-Labor Day timing.

From Big Sandy Trailhead, we hiked past Shadow Lake and across the Continental Divide at Texas Pass, a "backdoor" into the Cirque of the Towers, our first destination. One of my favorite former NOLS instructors was leading a course in the Winds and before he left we made plans over a beer in Lander to meet up in the Cirque. I found Logan napping in the sun, resting after leading some hard climbing with students. We caught up over tea and cake, baked over a backcountry stove.

NOLS pressed on in the morning and Tim and I had climbing to do ourselves. We choose Pingora, an aesthetic round spire of granite. Our East Ledges route (5.2) was warmed by the morning sun and we made quick work of the fun route. Pingora is one of the most popular mountains in Wyoming but our timing seemed to pay off - we had the mountain entirely to ourselves until our very last rappel!

We were back in camp by early afternoon, napping and playing cribbage. The next day we broke camp early to position ourselves atop Jackass Pass (Continental Divide crossing #2) for good morning photographs back down into the Cirque.

We then booked it 6 miles into Deep Lake Cirque, dominated by the imposing north face of East Temple Peak, one of the most beautiful mountains I've ever seen.

Fortunately, one does not have to climb the sheer face to the top; a climb along the righthand ridge system is more casual. Views from the summit of East Temple Peak were amazing, encompassing the plains and basins on either side of the Wind River Range, the bulk of the Range itself stretching away to the northwest with the glaciated summits of Fremont Peak and Gannett Peak (the Wind's highest) just visible on the horizon. In the lower valleys you could see the beginning of fall with the aspen turning yellow contrasted with the drab and dead white pine forests ravaged by the invasive pine beetle.

The bold could venture out onto East Temple's "diving board" a fantastically exposed and precipitous shard of rock protruding from the summit, with 2,000ft of nothing between your feet and the lakes and rocks below!

Later that evening, Tim and I were treated to an incredible sunset progression within the Deep Lake Cirque, the waters of Deep Lake stilling enough to capture the reflections of the peaks turn from yellow to orange to red before the stars came out and treated us to more incredible views of the Milky Way. 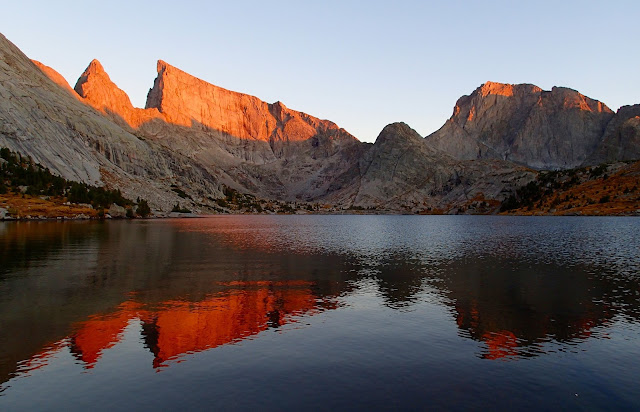 Pingora and East Temple Peak were the primary objectives of our trip. But with continued good weather and an extra day of food, we roped up again for a "bonus" climb up Haystack Mountain. It was windy and exposed, giving it a definite "alpine" feel, but the climbing was easy and straightforward, if a bit longer than expected. Tim and I wanted to rename the peak "Energizer Mountain" because the number of false summits made it appear that it kept going and going. We eventually made the top and enjoyed the views.

Our adventure complete, we headed back to civilization, appropriately stopping at the Wind River Brewing Co. in Pinedale for celebratory beers and gluttonous burgers (topped with beef brisket!) on our way to Jackson. A few more beers atop the saddles in the Cowboy Bar finished our toasts to mountains, weather, and friendship, and I bid goodbye to Tim at the airport the next morning.

It's on to Colorado for me (#46), checking out Rocky Mountain National Park and picking up yet another Coast Guard buddy in Denver for my final drive across the country to finish all fifty states!