On Friday I boarded the M/V Malaspina, a 408 foot car and passenger ferry, in Bellingham, WA. Cars starting boarding at 3pm, but I didn't get on until 5:45, the second to last car before our 6:00 departure. I don't envy the car deck crew, they had to figure out how to load what seemed to be just under 100 cars, trucks, boats, and trailers of various sizes and destinations. And take on more during our trip. 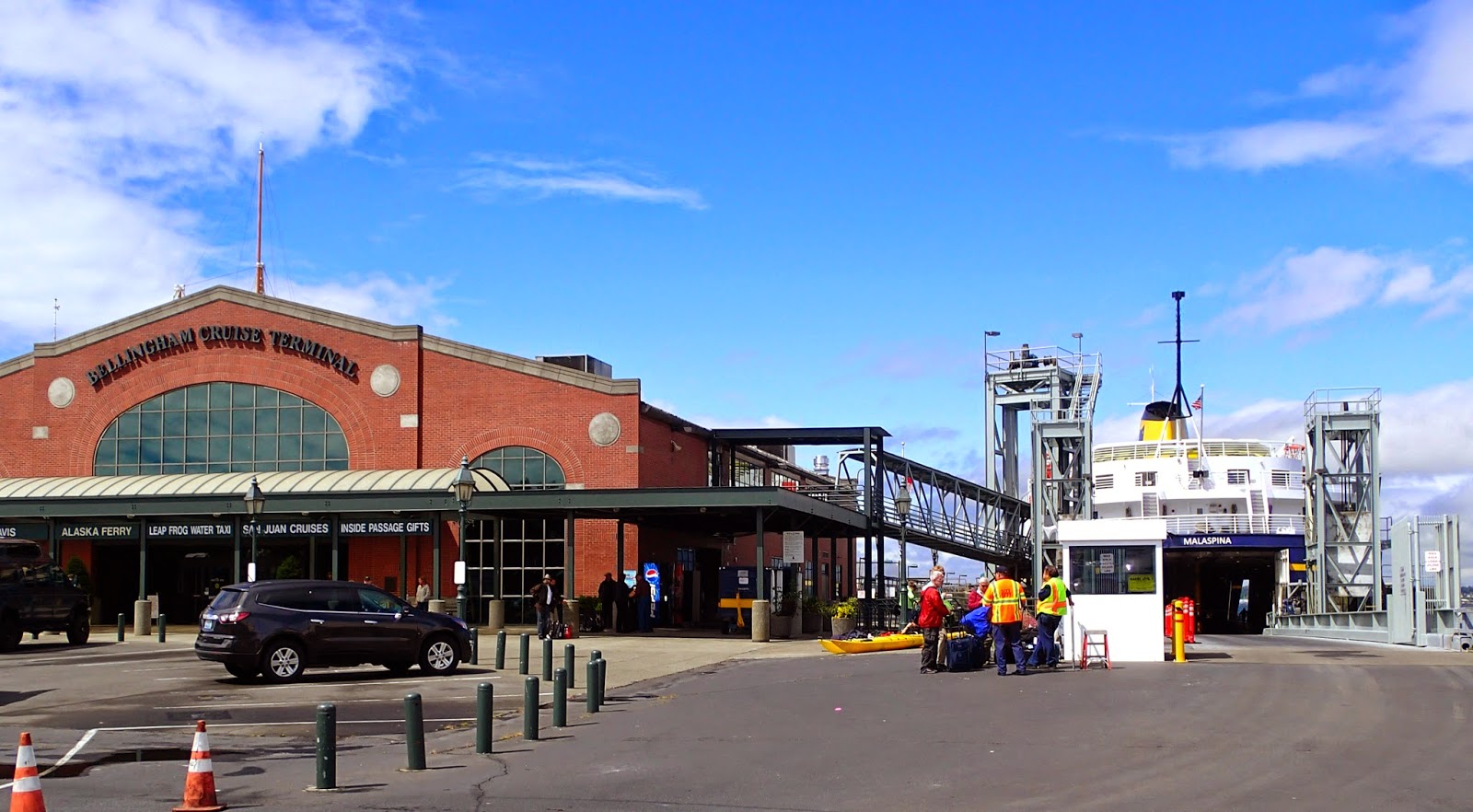 The Malaspina is the oldest vessel in the Alaska Marine Highway System, built in 1963. She had a cafeteria, cabins, movie theater, bar, and various lounge areas. I eschewed the expenses of a cabin and the cafeteria for a lounge chair in the solarium for my sleeping bag and a bunch of MREs that I had to eat before they go bad. 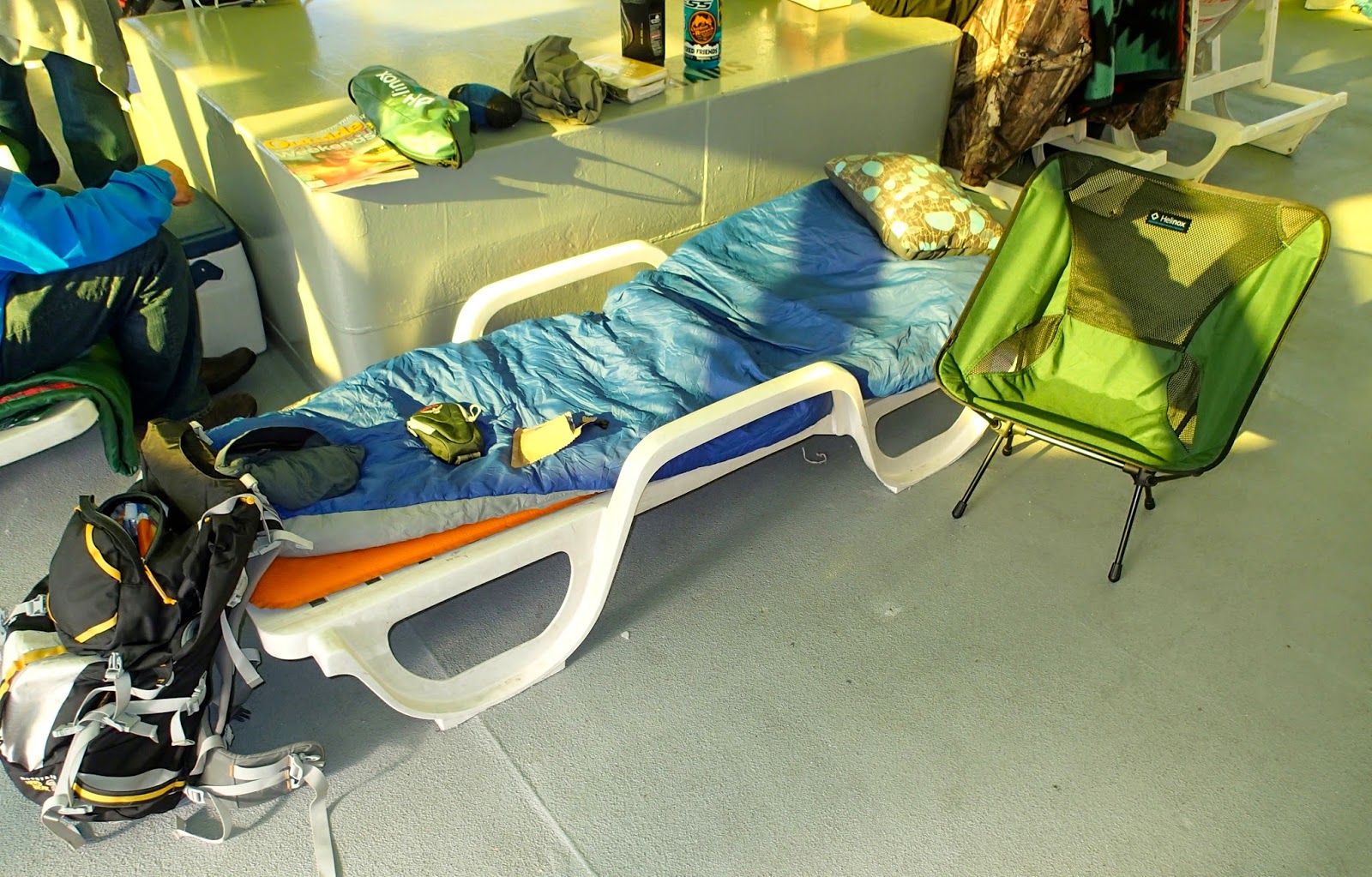 The solarium wasn't too bad. It was well protected from the front and sides, but open in the back. The first night we had a slight breeze abaft the beam so it got a little cool. Which wasn't a big deal until another passenger decided to cut the breeze around his sleeping bag with a space blanket. Why anyone actually uses those things is beyond me. He sounded like a potato chip bag getting repeatedly crunched at Mach 2 and connected to a megaphone. Luckily, daybreak came fast at about 4:20am, so I didn't have to listen to him much longer. After that it was nice in the solarium, though it did get uncomfortably warm in the afternoon when the sun turned it into a mini greenhouse.

There was a great community of folks on the aft deck, and on board in general. I met a number of fellow travelers and heard some great stories. A recently retired Army Sergeant Major making his final move with his wife to his house in Fairbanks. A Radioactive Tracer Technologist on two weeks of vacation for her birthday. A former Ice Road trucker. A glacier pilot. A salmon fisherman. And a bunch of old people in RVs.

Our first stop was in Ketchikan. We had 4 hours to explore the town. I walked the mile or so from the ferry dock to the more historic parts of town to see the sights and grab a cup of coffee. Ketchikan was cool, I didn't spend enough time there to make any sweeping observations other than the fact that the old and fat cruise ship tourists, and all the tacky business that support them, had taken over a good bit of downtown. 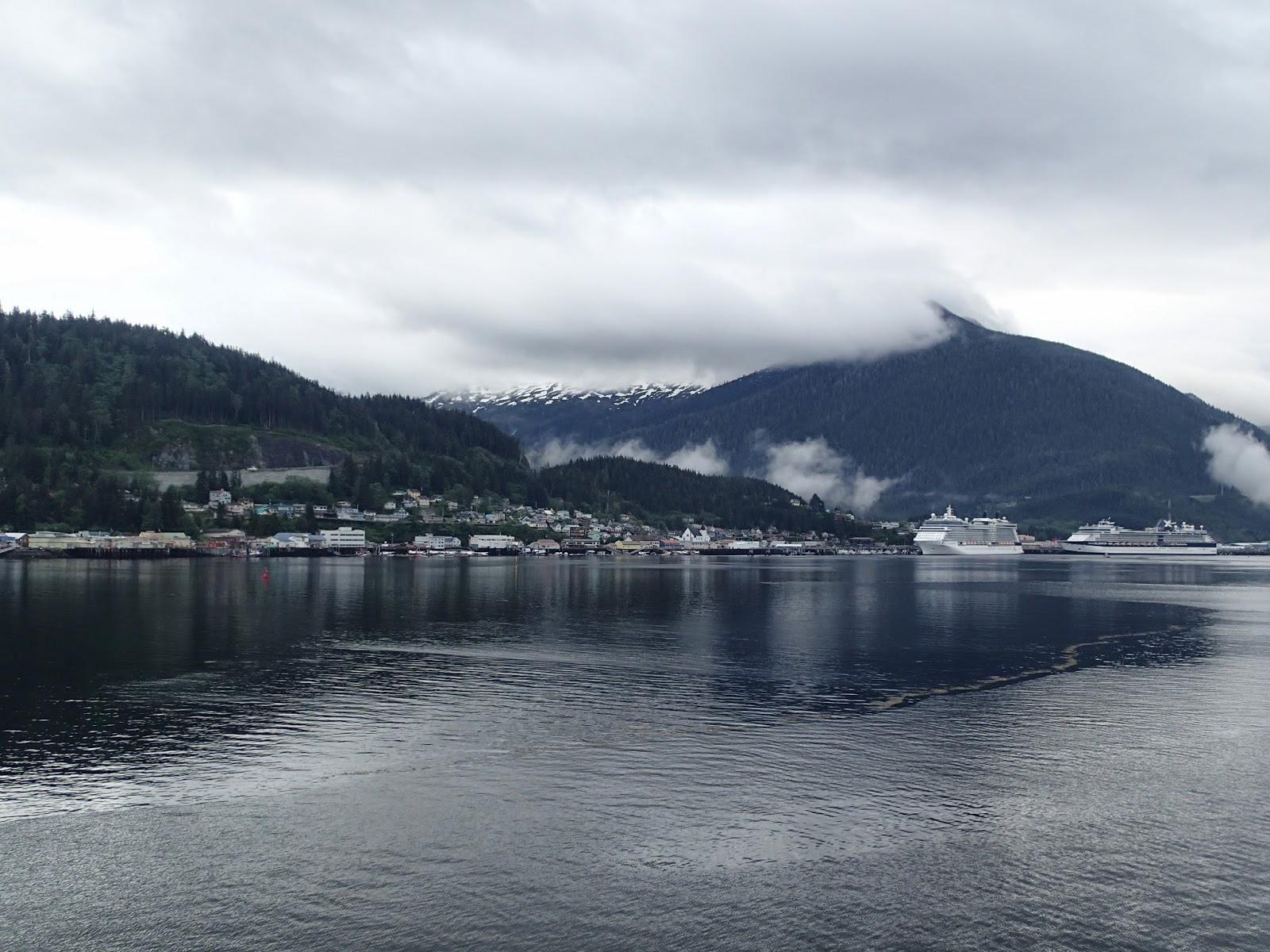 Creek Street was pretty novel. It was built in pilings and served as Ketchikan's Red Light District back in the 1900s. I thought its motto was pretty catchy: "where men and fish go to spawn." 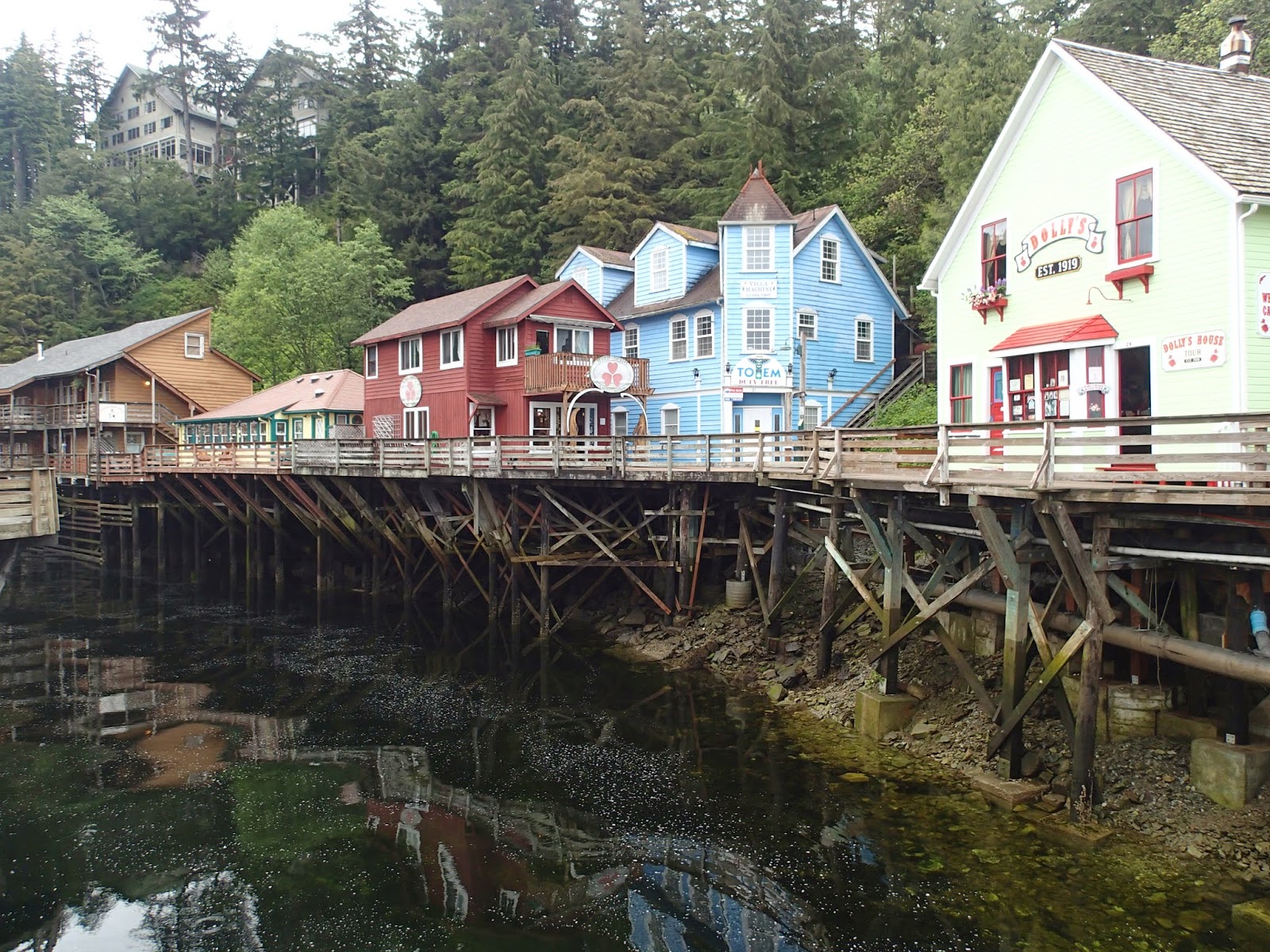 I spent most of my time in the forward lounge, watching the progress of the ship thru the Inside Passage. It was pretty spectacular, and got better and better as we travelled north. The sun came out after Ketchikan and we could finally see the snowcapped peaks of the mainland contrasting with the dark green forested slopes nearby and the blueish water of the passage. The photo below doesn't do it justice. My epic port-to-starboard panoramas didn't work out as planned. My stitching software didn't appreciate the fact that the ferry was continuously moving at 15 knots, meaning that the images didn't quite line up and I lost some good shots.

We made a brief stop in Wrangell, too short to do any exploration. The best part of the trip came in the Wrangell Narrows, which truly defined "inside passage." I think in some places I could have chucked a rock from the ship to the shore on either side. 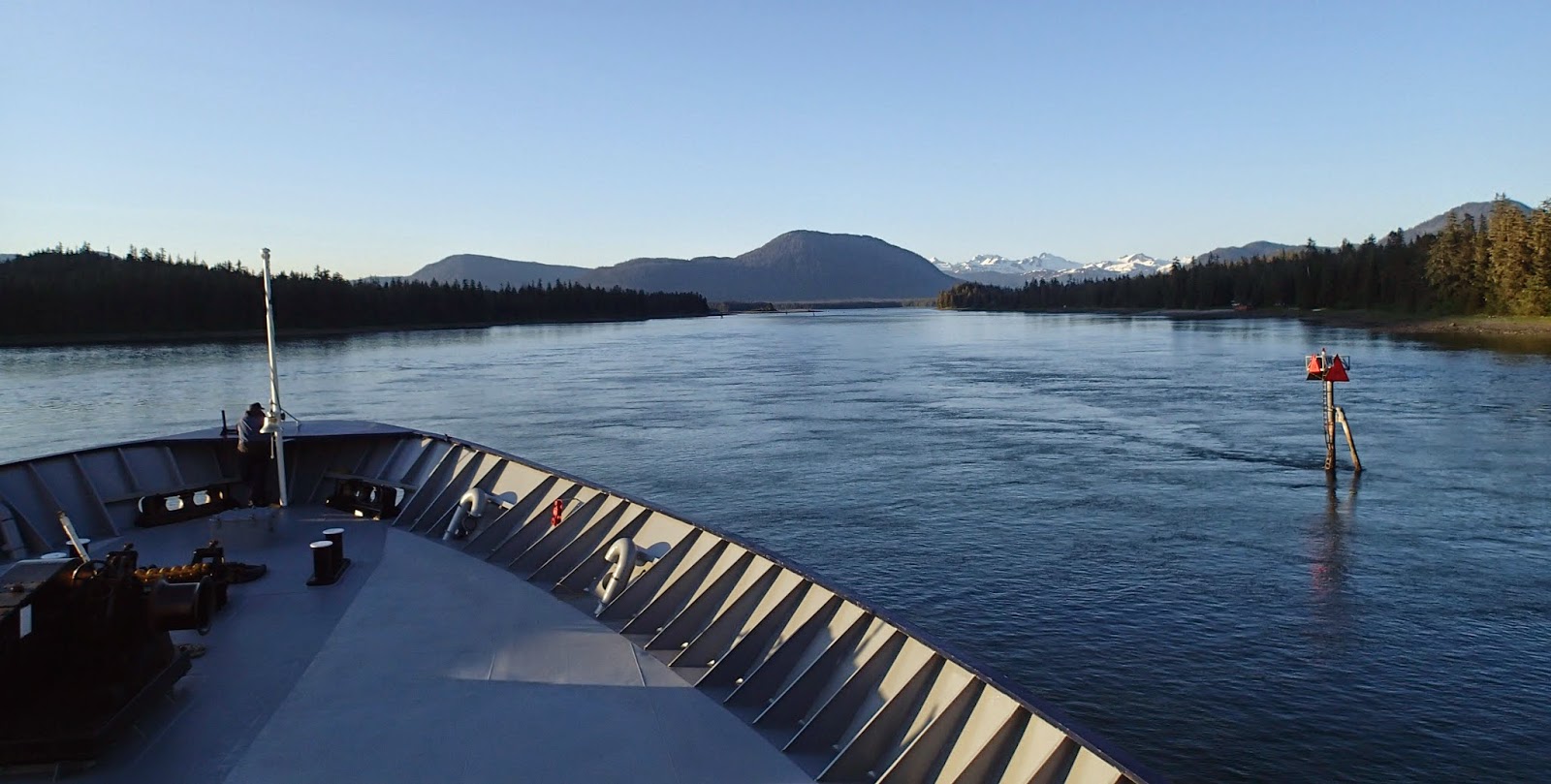 We made another quick stop in Petersburg just before it got dark. Again, not enough time to go ashore, but I snapped a good shot.

I had a weird expectation of wildlife. I guess I thought the entire route north would be lined by non stop breaching humpbacks and orcas. That wasn't the case. I did see more porpoises and bald eagles than I could count, but only 4 whales. They were probably sei or fin whales, though one did give us a nice fluke show.

I guess I'll have to wait until later this week when I'm in Glacier Bay for the wildlife bonanza I was hoping for. Thanks to Crystal and James for putting me up in Juneau!
Posted by Matt Kearns at 12:48 PM