I've been a human tornado of activity this last week. All the months of planning and preparation finally have come to a head. I wanted to give everyone a glimpse into the preparations I've made for my long road trip. Admittedly, my final preparations themselves felt rushed. I thought I was doing a good job and not procrastinating, but the night before the movers came I was up till 4 am with a final load of dehydrated goodies and packing. I wanted to get the truck fully packed up and ready to go before the movers arrived to avoid the following situation:

Tuesday, May 20th - "I'll just set all the important gear off to the side. I'm sure the movers won't touch it."

Wednesday, May 21st - "Hmm, where are my mountaineering boots. They aren't in the house, so they MUST be in the truck."

Sometime in July, at some remote base camp in Wrangell National Park - "Oh no..."

So, after a 6 hour long game of Tetris with various boxes of food, bins of gear, sleeping bags, boots, backpacks, water jugs, cooler, duffels of clothes, and more boxes of food, the truck is all packed up: 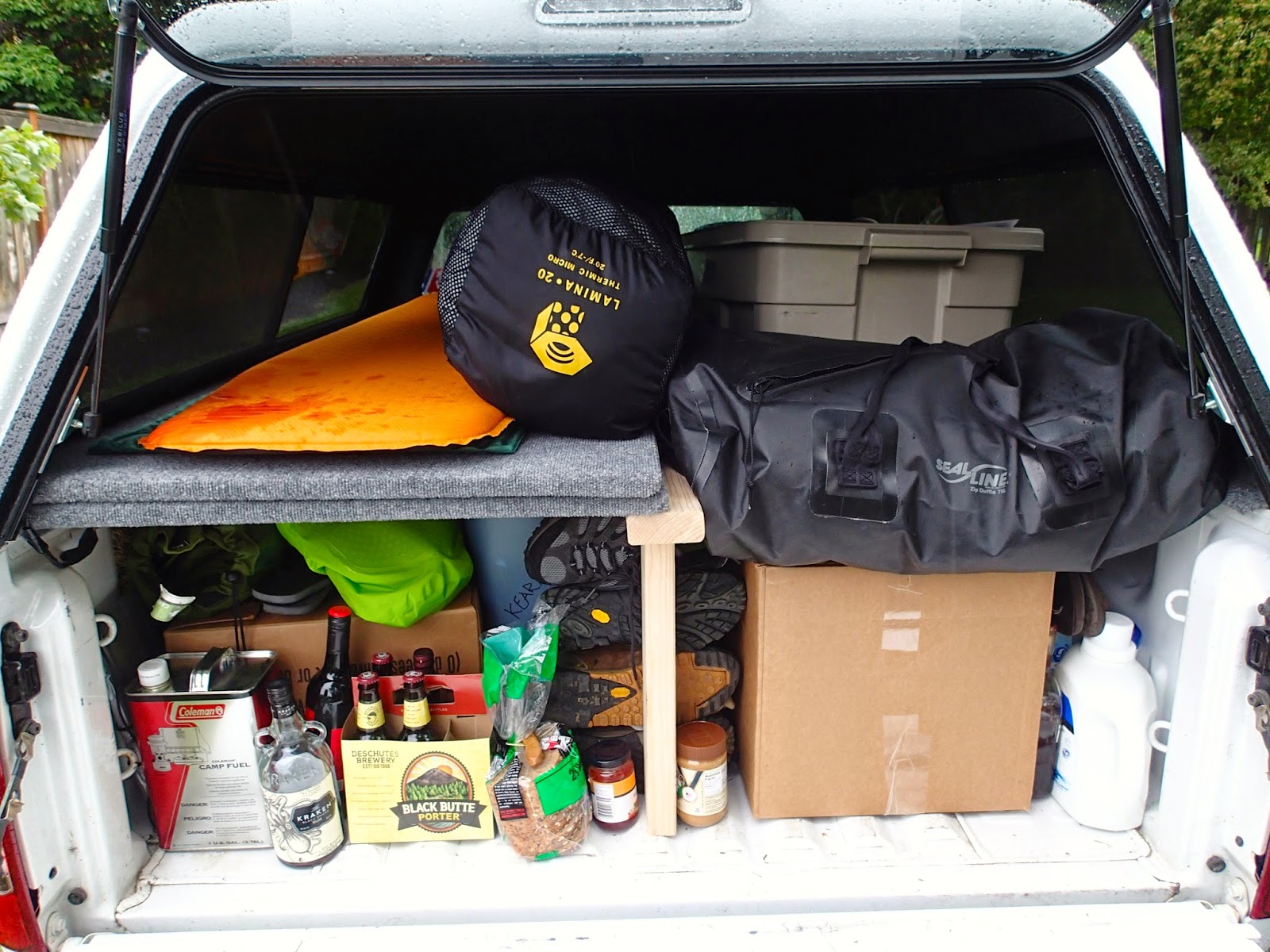 I lost the construction photos when my old iPhone crashed, but Dad, Phil, and I (ok, mostly Dad) built the sleeping platform on the left with 3/4" plywood, 2x4s, and some outdoor carpet. I'm really happy that we had the foresight to make it modular - if you look close you might be able to see two pieces of plywood stacked. The one on top will slide over to the right and wedge into place, giving me the option to deck over the entire back and stretch out at night. I'll show you that later. But if it wasn't modular I'd be in a pinch. I have way too much stuff starting out. I won't go into the details of everything that is packed in there (I have a few cool items that I'll reveal over time when they get proper use), but most of it is food. How much food? Probably enough for 4 months without resupply between canned goods, dry goods, MREs, a few freeze drys, and my homemade stuff.

The biggest part of my preparations, aside from arranging trips, reservations, logistics, etc, was to try and dehydrate enough food to last for all or the majority of the road trip (thru late October). I'm not a huge fan of eating sodium laced freeze dried mush 24/7 and that stuff gets expensive. I have a dehydrator and a vacuum sealer, which make it pretty handy to make my own lightweight, easy, and gourmet backcountry meals and preserve them for long term storage. I'll go into specific recipes and such later.

So after 2 months of nearly constant work and around $600 in groceries later, I have the following spread (before vacuuming): 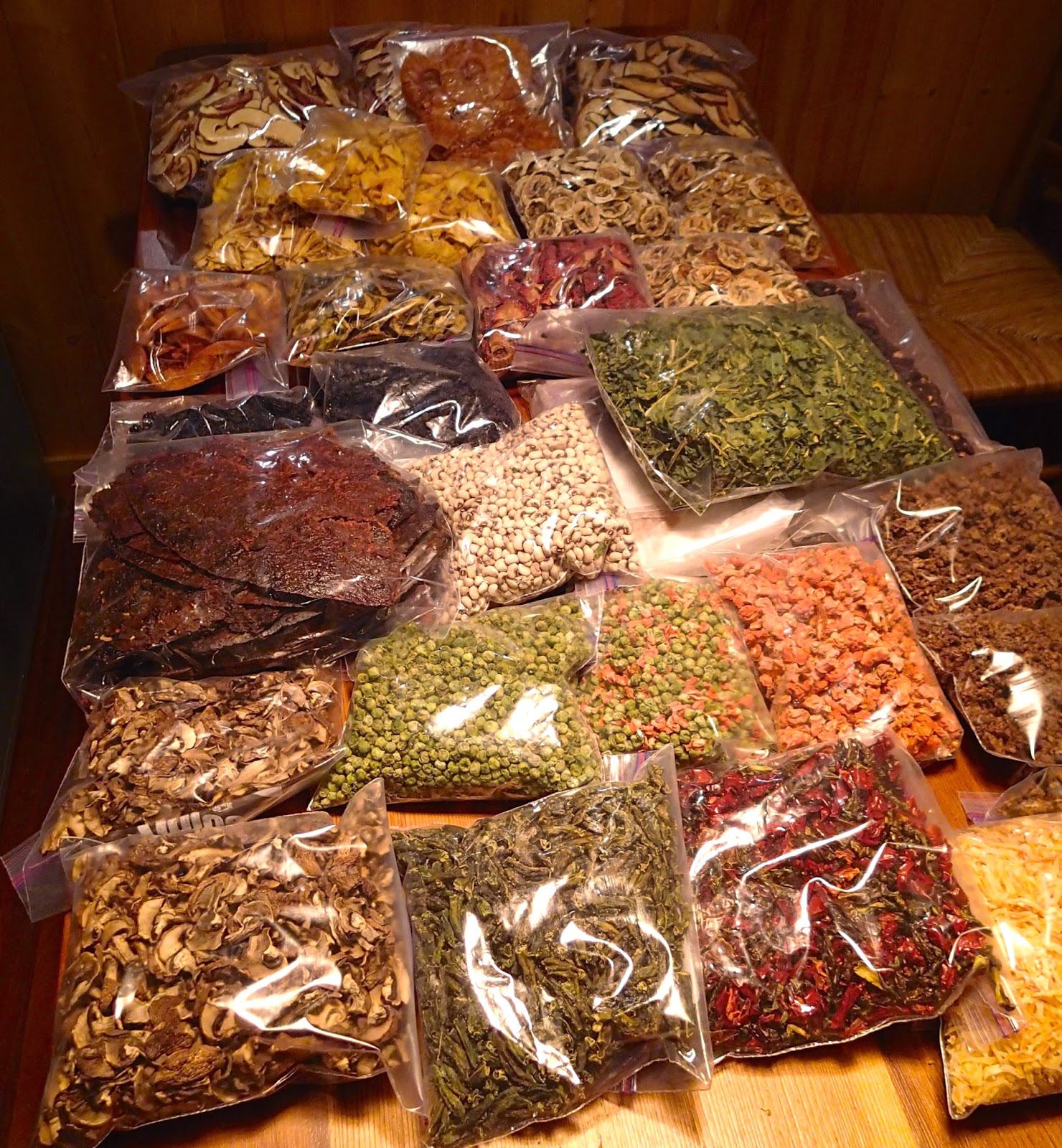 What all is included? Good question. Here goes:

Delicious! It's amazing how much food is really water weight. You can fit around 30 dried apples in a gallon ziplock. Or 4.5 pineapples in a quart ziplock. And with the vacuum sealer, that stuff will last at least a year, more like two.

So everything is loaded up and ready to go! I meet my ferry at 3 pm today, drive my truck onboard, and then try to stake a claim to a lounge chair or some deck space to sleep on for the duration of the three day voyage. We'll leave at 6 pm today (Friday May 23) and arrive in Juneau at 6:30 am on Monday May 26th. I'm looking forward to the trip thru the Inside Passage, I hope I'll see some humpback whales and orcas.

That's it for now. Next stop Juneau!