Wow, what a trip! These big weeklong+ trips are harder to write about than I thought they would be. So much stuff going on and too much to cover. Therefore I will write only a "brief" synopsis and let the pictures do the talking.

After I left Juneau I took the ferry from Haines, AK and then drove thru British Columbia and the Yukon back into Alaska. I met my rafting counterparts and the guides in Fairbanks. Aside from the guides, which I was (happily) mistaken for by other clients - a sure credit to my beard, I was the youngest by far as all others were retired.  Despite the age difference, we really gelled as a group. My favorite people on the trip were the other "bachelors" (wives opted out of Alaska). As a retired ecology professor, Earl from Michigan was a wealth of Arctic knowledge. And my "raft buddy" Jacek, was a hilarious Polish-American with a rich accent and some of the best stories I've ever heard.

We flew from Fairbanks to Arctic Village to meet our bush planes. Last post I mentioned that I set a record with the smallest plane I've ever been on... well that was promptly broken when I boarded a 4 seater. The planes (and pilots) were amazing. These things could land on gravel bars beside the river and only needed about 90 yds to take off and land fully loaded. Yes, 90 YARDS. The hour and a half flight from Arctic Village took us over the Brooks Range and the Bearing/Beaufort Divide. 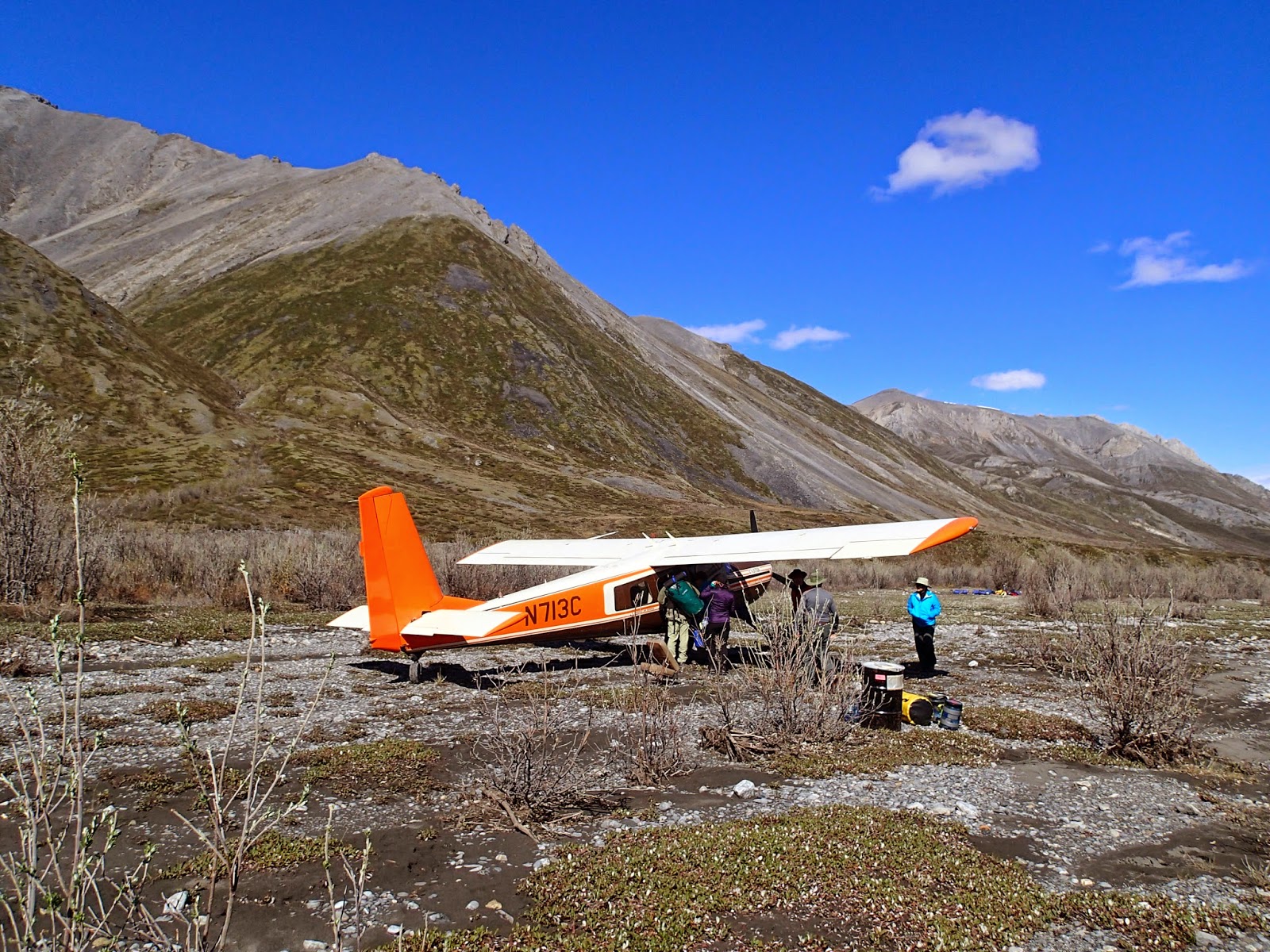 Rafting the Kongakut River was far more "engaging" than I expected. We all paired off in inflatable canoe-raft hybrid craft that handled like fat pigs. The guides were only in the front boat (navigating) and rear boat (picking up flippers), so it was completely on us to take the channels indicated by the guides and to maneuver through Class II-III rapids and dodge the rocks. I relished the chance to really paddle the river myself. Happy to say that Jacek and I proved a good team and we didn't flip.

We would paddle for a day and then set up a camp and hike the next day. This allowed us to take a nice leisurely pace since we weren't packing up each morning. The hikes were great, giving views of mountains, tundra, wildlife, and the river ahead. Hiking in the tundra was a novel experience, the ground was very lumpy due to the permafrost and very boggy in the spots between humps. Made for hard going from time to time. And the scale of the terrain is something that cannot really be conveyed. It was amazing. Everything was so open and grand, but lacking any real trees or objects to provide any reasonable reference point and making it difficult to gauge the distance or elevation of a hike. 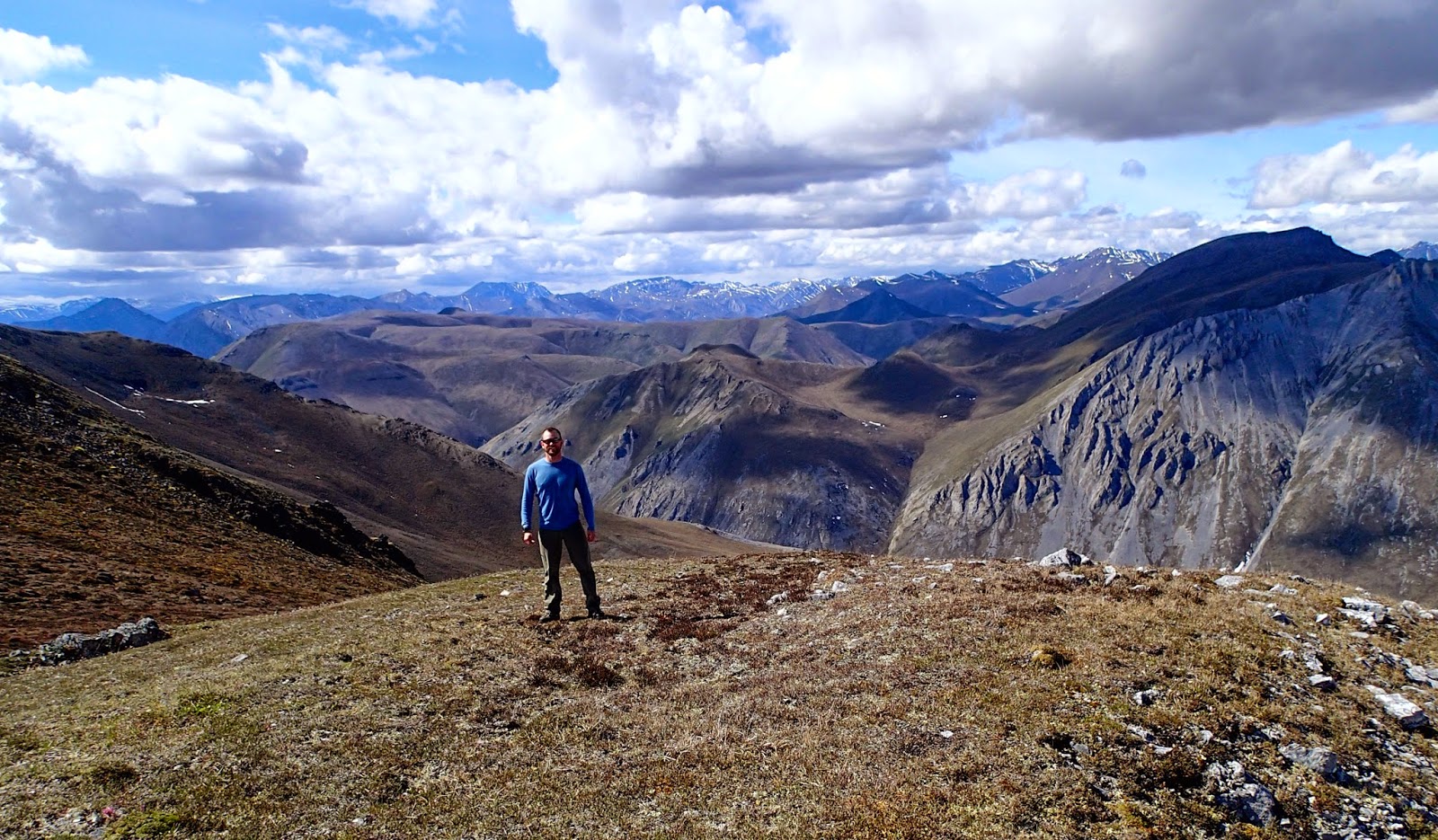 My favorite hike was a scrambly adventure up what is likely a previously unclimbed rocky outcrop 2000ft above the river. 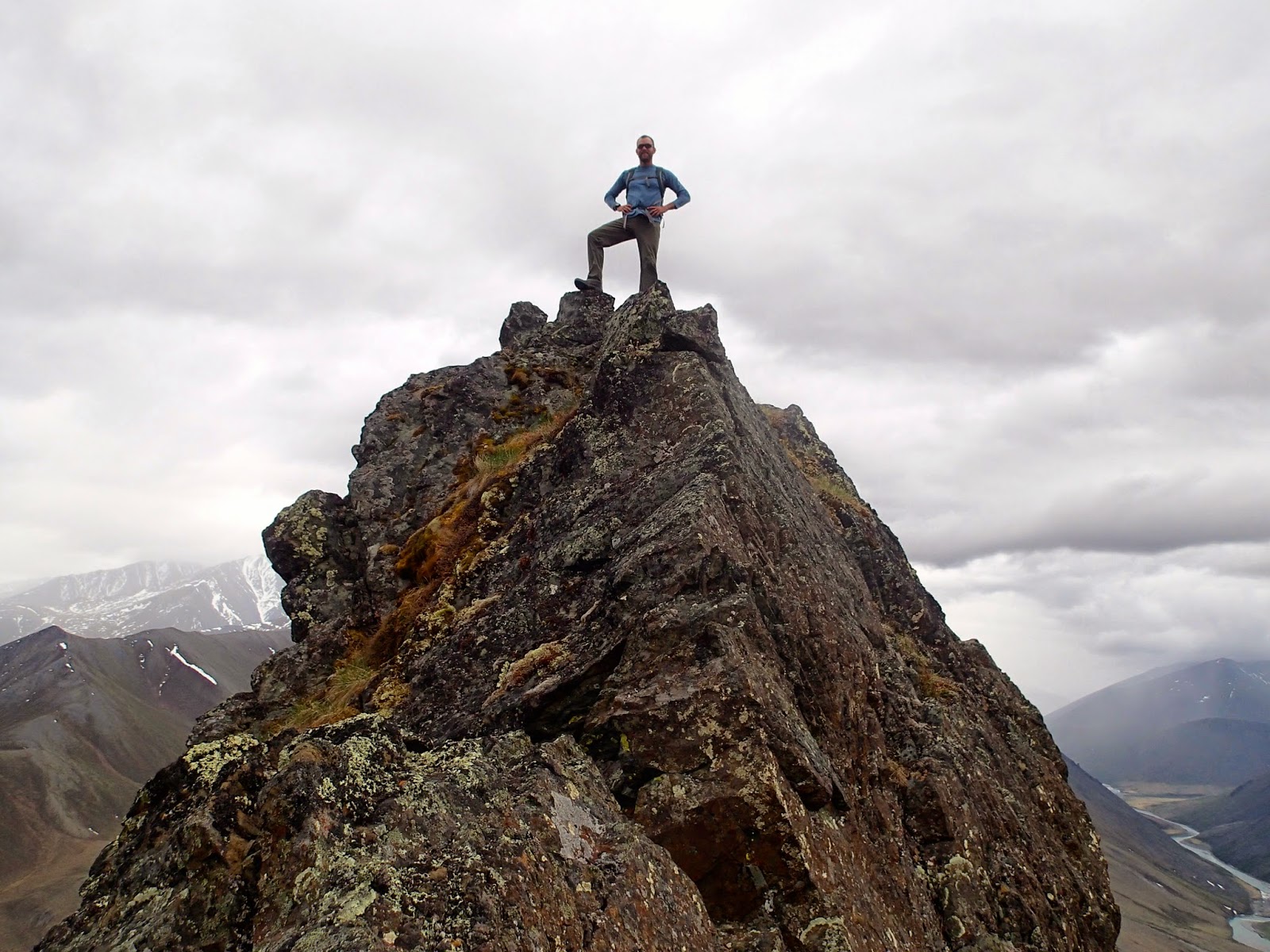 Jacek had the wonderful foresight to smuggle along some beer and let me tell ya', a river-chilled Alaskan Amber at the end of a steep hike or hard day of paddling was the best. 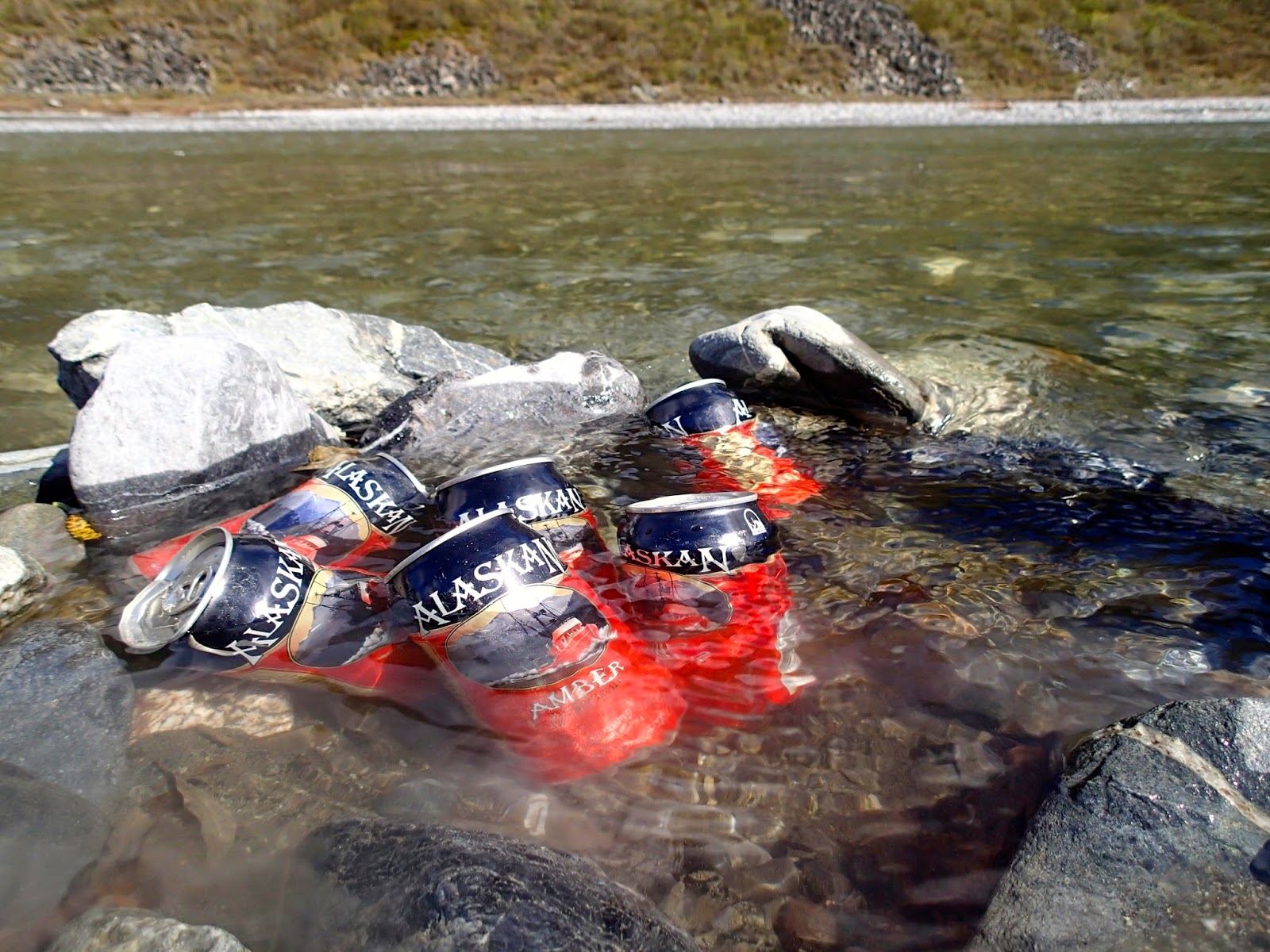 And the wildlife was AMAZING. We were right in the heart of the migration of the 100,000 strong "Porcupine Herd" of caribou. Not a day went by that we didn't see any caribou. They were often in groups of 20 to 200 and all seemed to be in a hurry to keep heading north. Very fast creatures. 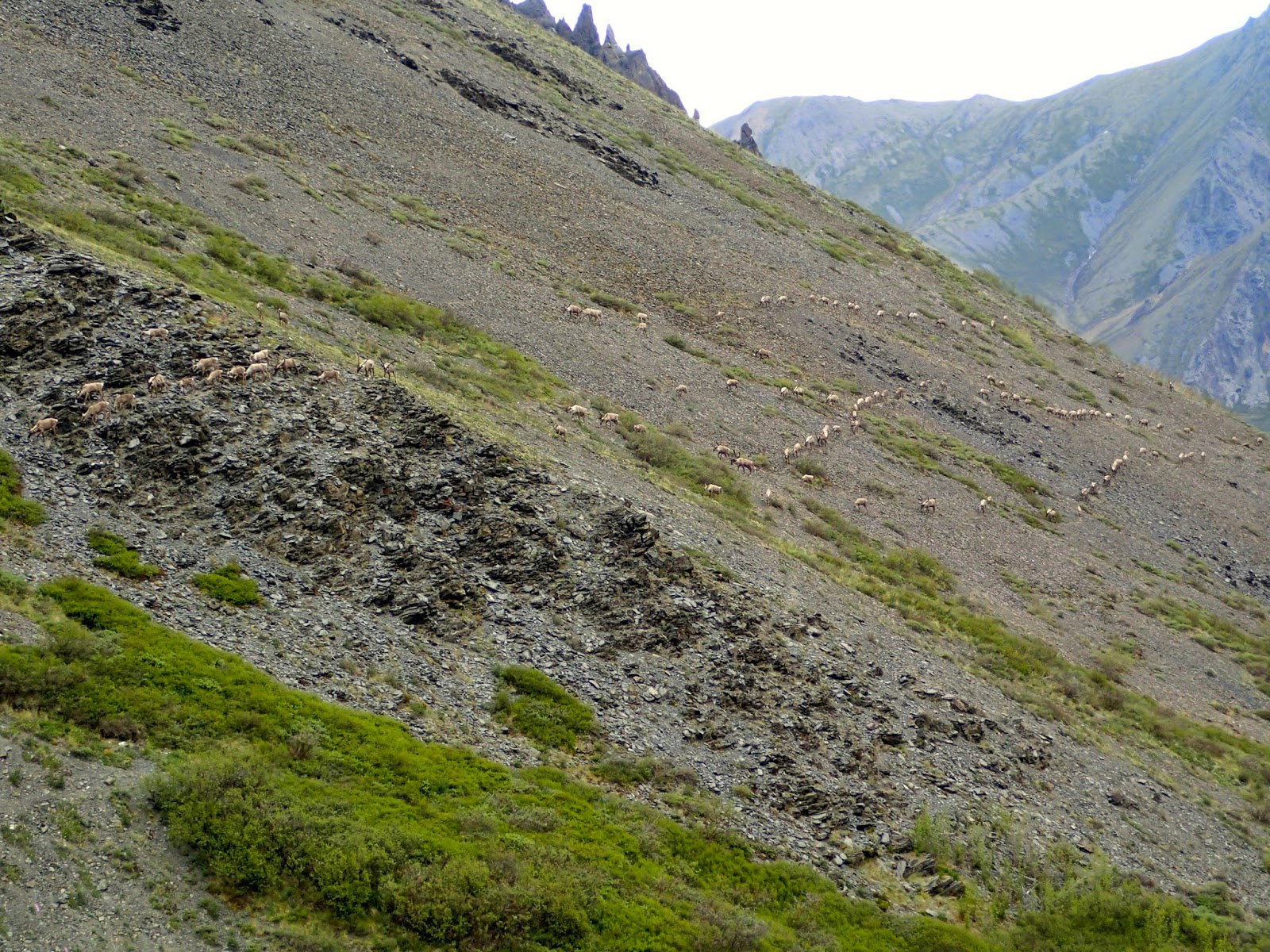 They always travel in single file, presumably to save energy when tromping through snow. And both male and female caribou have antlers. The females shed them once they give birth. Then mice eat the antlers and poop out the calcium, which is then absorbed by the grass, which is then eaten again by the momma caribou, which gives her calcium-rich milk for her calf. Basically they import the extra calcium they need from the rest of their feeding grounds. Isn't nature cool? 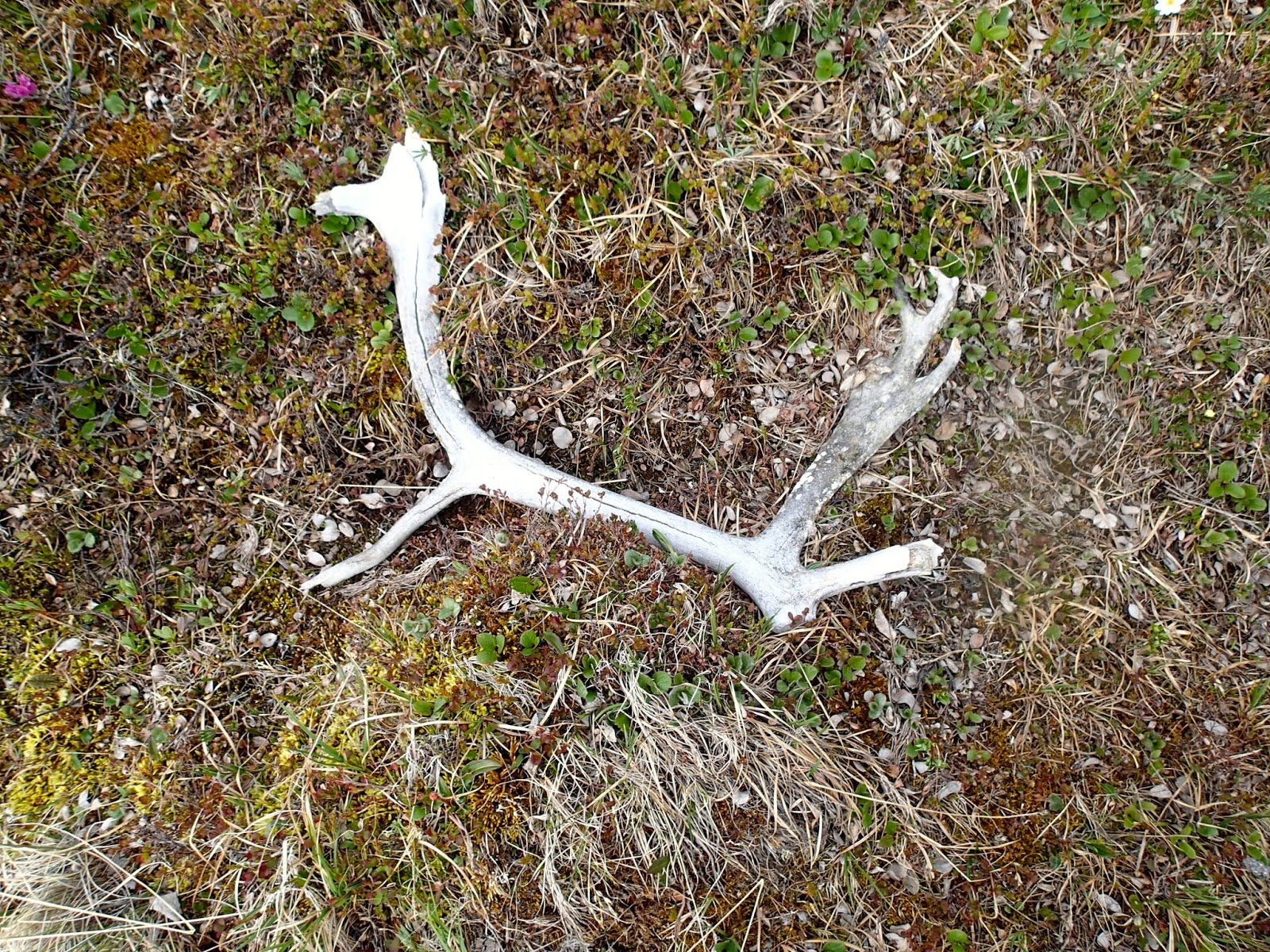 Toward the end of the trip (we were floating north toward the coastal plain and their calving grounds) I saw at least 1,000 caribou from a small rocky outcrop above the tundra. (Hard to see in the picture below, but they are in there).

And we saw a ton of wildlife besides caribou, including Dahl sheep: 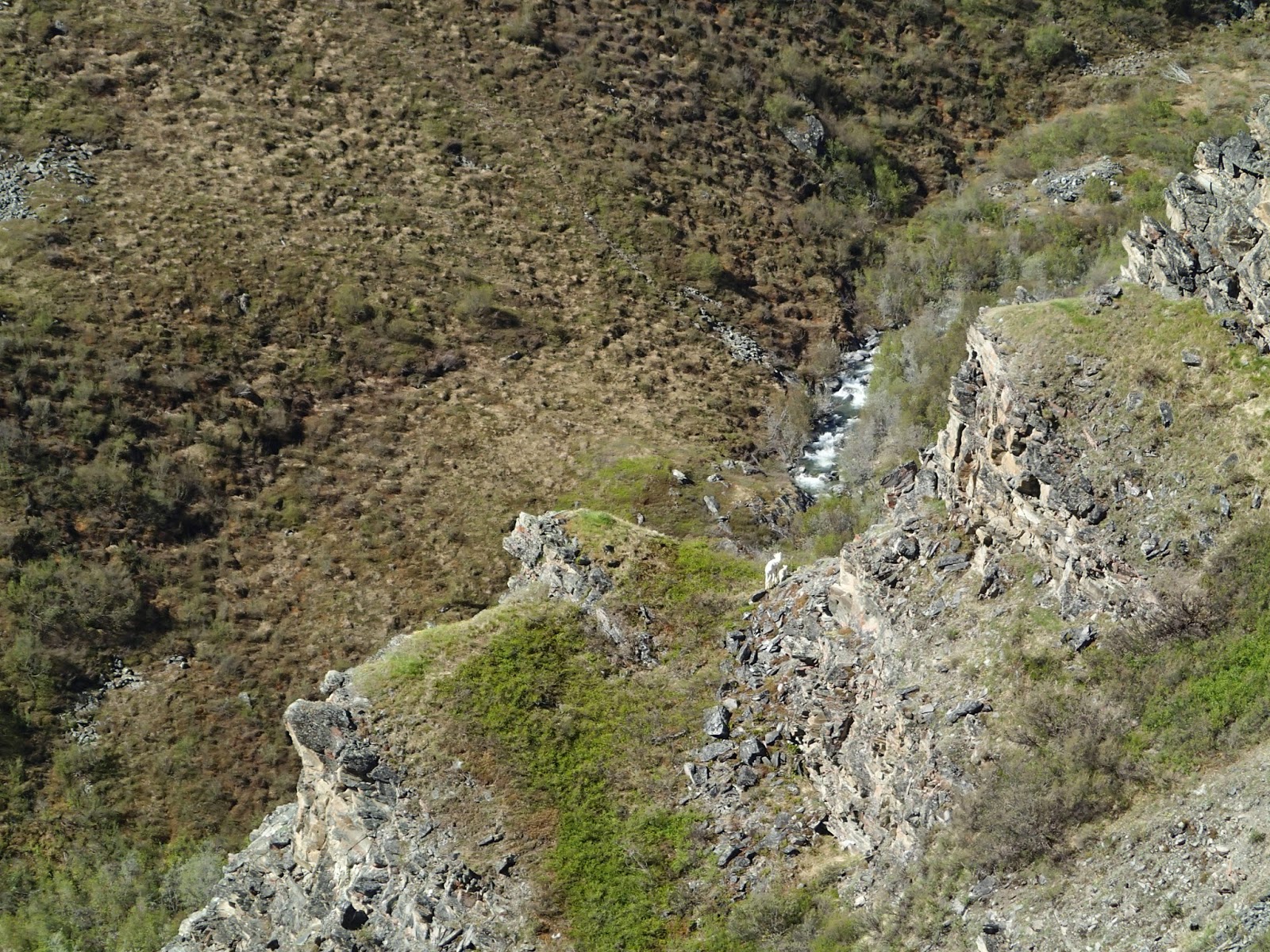 A Grizzly (the blonde dot, about as close as I care for). 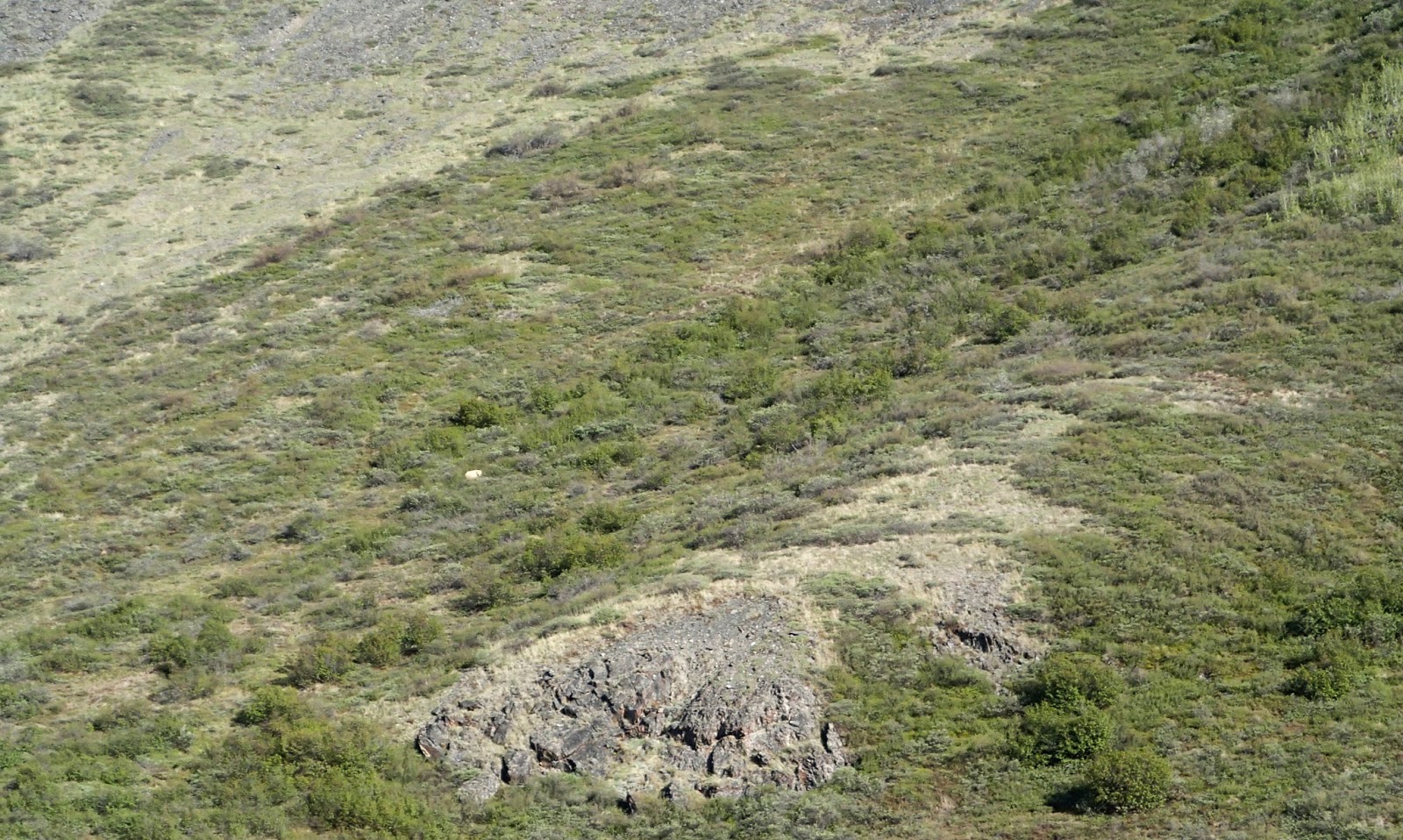 And a wolf. Just kidding. I wish. These tracks by the river were as close as we ever came. 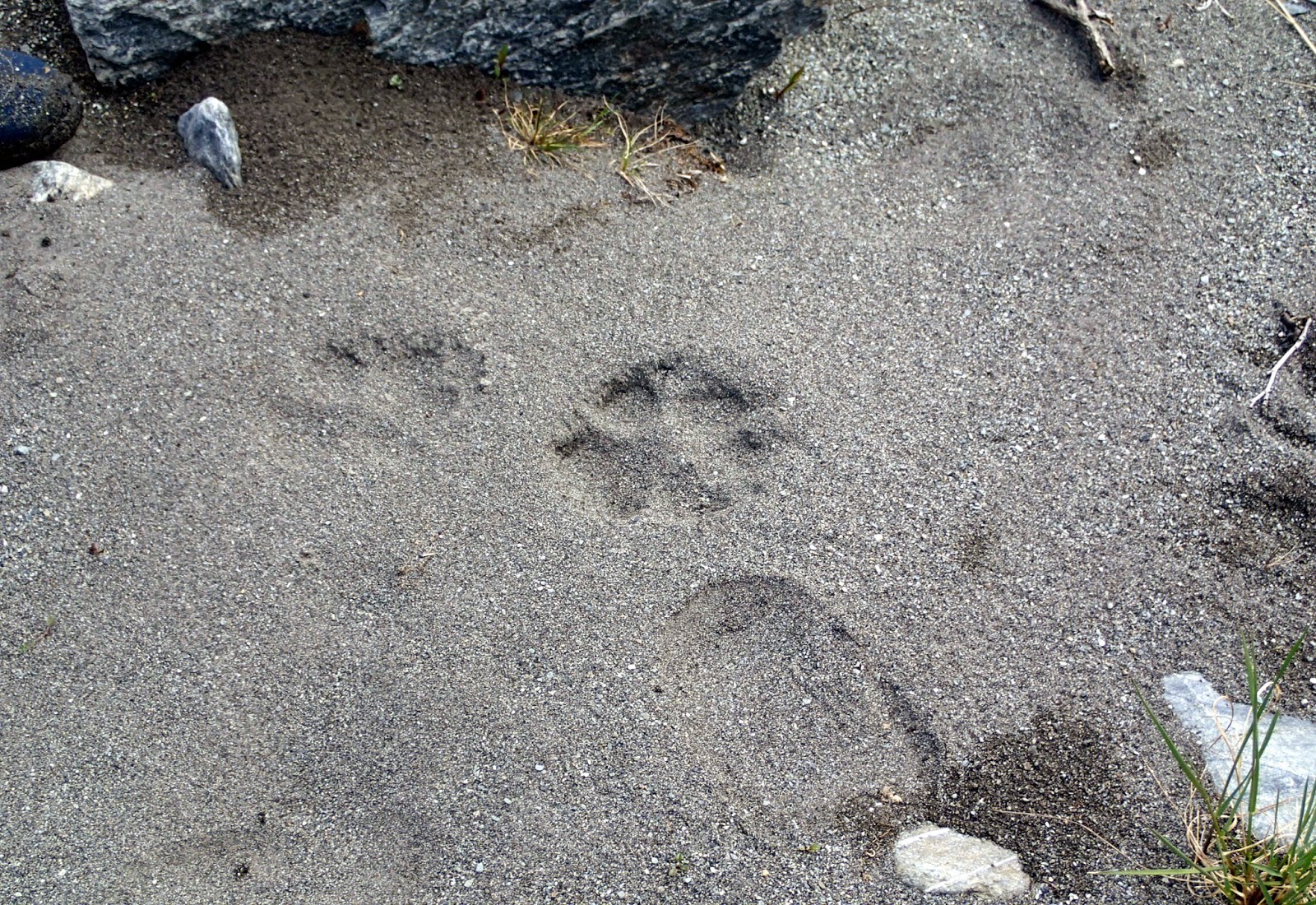 We also had some aquatic creatures. Earl and Mario, our guide caught a couple Arctic Char that we ate for dinner one night. Excellent meal. I caught an Arctic Grayling later in the trip but it was small so I let it go. But I've finally outdone my father - that grayling will probably be the only species of fish that I've caught that Dad hasn't!

And not to leave out the Arctic flora, Mario and Earl knew their plants and passed along some of their knowledge. Too early for berries, but we snacked on some colt's foot, like a salad green. And we found lots of these guys - lapland rosebay, a member of the rhododendron family. A little WV in AK! 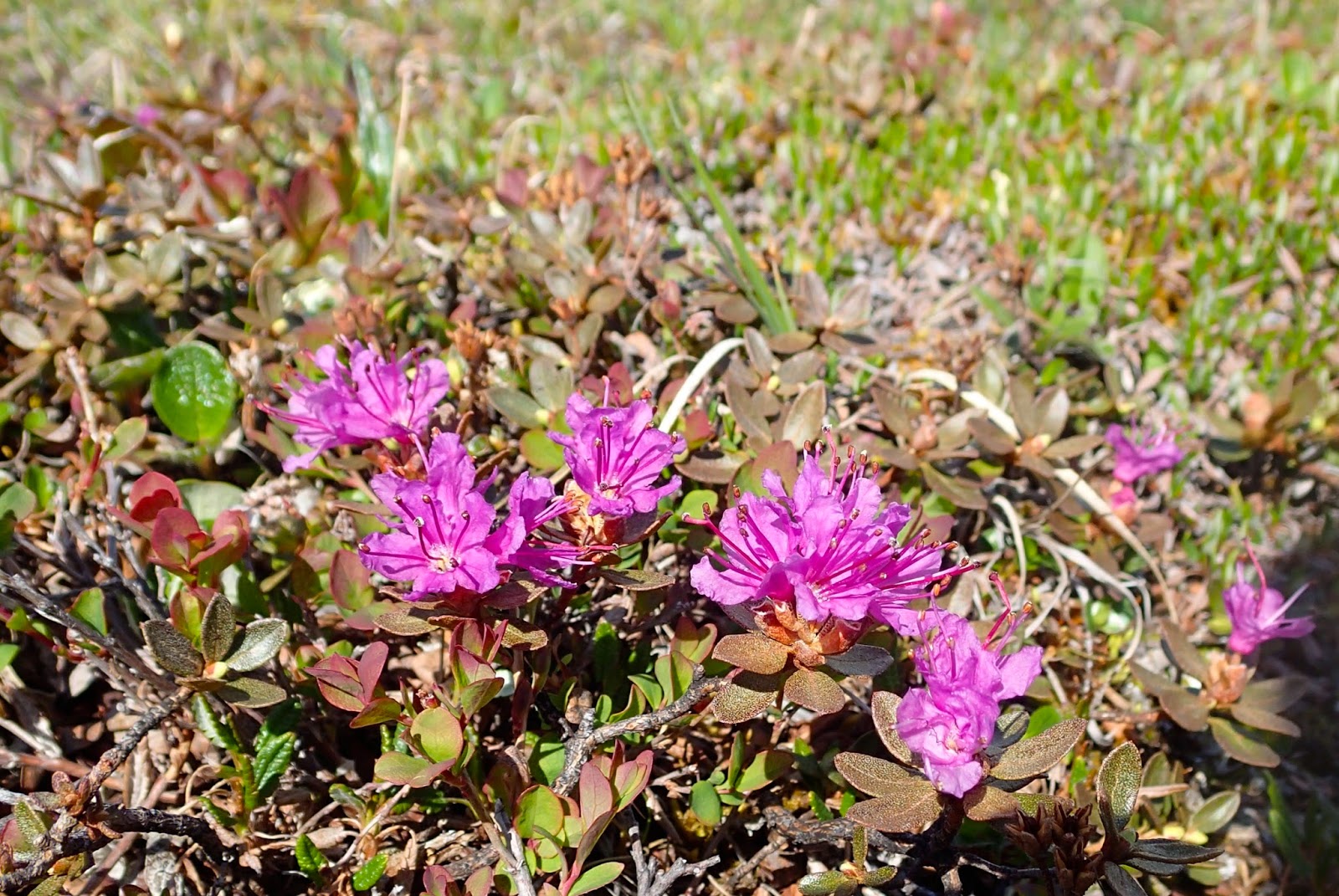 As I said, we were heading north. By the end of the trip we were within a dozen miles of the Arctic Ocean. We didn't paddle all the way down because the river braids out and gets heinous to navigate and paddle in the shallow channels. So we hiked up a peak and were able to lay eyes upon the Arctic and the pack ice! Great way to finish out the trip. 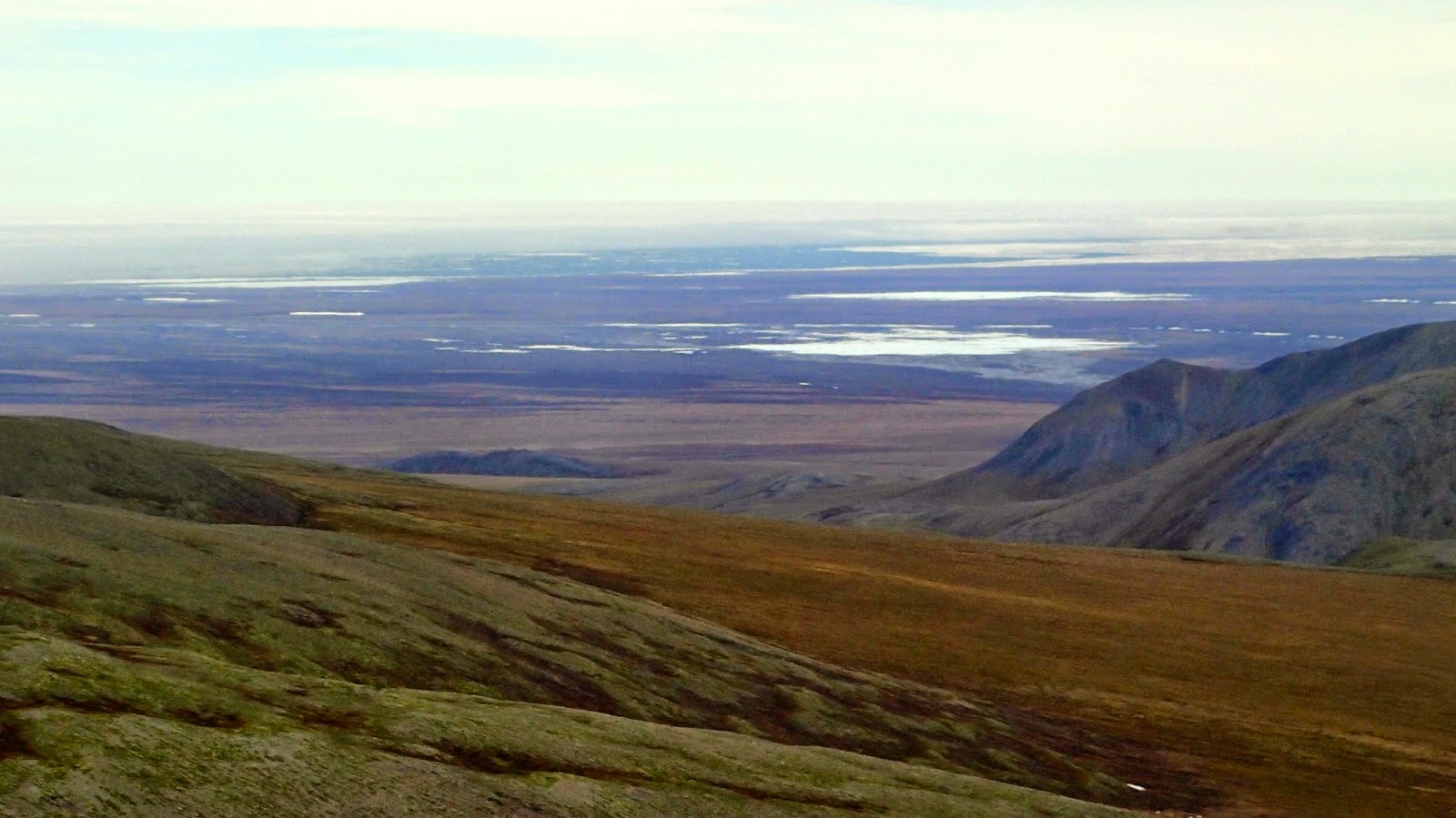 Heading down to Denali next. The bears will have their choice between a soft Matt-taco (me in a sleeping bag) or a hard Matt-taco (me in my fiberglass truck canopy).
Posted by Matt Kearns at 7:06 PM